I thought it would be interesting to revisit some of the Augmented Reality tools that have Unity3d packages for them. The first I headed for was Vuforia, now owned by PTC. I am using the free version. It all worked straight from the install, though there are a lot of features to tinker with.
I wanted to use an image marker of my own, so naturally I used the book cover. There is a lot of AR and VR in the story so it all makes sense.
For the 3d models I used the current trial of Fuse/Mixamo now part of the Adobe. It lets you build a model and export it in a nice friendly Unity3d fix format. You would be suprised how these various formats for models and animations hide so much complexity and weird tech problems though. Eventually I found a couple of animations that fitted the mood. This is not a full action sequence from the book, but it could be. I have some more vignettes in mind to experiment with. I am just upgrading my windows machine so I can use the Kinect 2.0 for some of my own motion capture again. Finding the right animation, and then trying to edit it is really hard work. The addition of motion, especially in humans, hits a different part of the brain I think. It makes lots of things look not quite right. 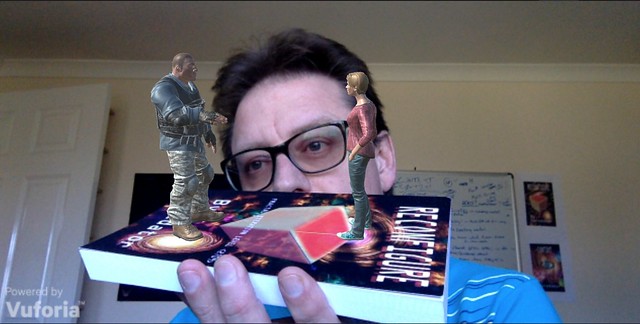 Reconfigure and Cont3xt are available right now to enjoy, and if at all possible, PLEASE write a review on Amazon, it makes a massive difference to the take up of the books.