Yesterday I popped along on just an expo pass to London’s Excel centre for the Wearable Technology show. Despite its name it is not all about wrist watches that check your heart rate. The organisers have recognised the wider implications of things getting more instrumented, more data flowing and more business opportunities in the Internet of Things industry pattern. I had several reasons to pop along, the main one there will be a little more on later. I alluded to some big changes in a tweet. I don’t mean to tease but I am going to anyway.
One of the reasons I went to the show was to see some of the sports tracking wearables though. This was more in keeping with the title of the show. I was interested in both the physical monitoring, taking it past heart rate, and how the coaching software was shaping up to make sense of the data. I was also interested in anything that helped track the type of movement. Both these are from my training and teaching in Choi Kwang Do. A lot of the newer body monitoring kit was being built into skin tight performance clothing. That seems a good idea in general, and for a martial art, not having things on our wrists, yet getting some great training and tuning feedback during cardio and PACE training is going to be useful. There was only really one body movement tracker, related to boxing. It was based on the accelerometer principle, combined with an app that told you how many punches you were doing and at what rate and also showed the speed of the punch. It is not out for a while but it will be interesting to try this version with our more unusual martial arts moves. It is called Corner
Another reason to go, just in general because it’s what I have worked with for years is the VR and AR aspects of the show. There were a lot of headsets, both full immersive Rifts, Gear VR and also lots of peppers ghost, not really a hologram, heads up displays. There were some interesting uses to track warehouse goods in a HUD and also using projection onto a surface to avoid the need for glasses at all.
One company I spent a bit of time talking to and taking the demo was vTime 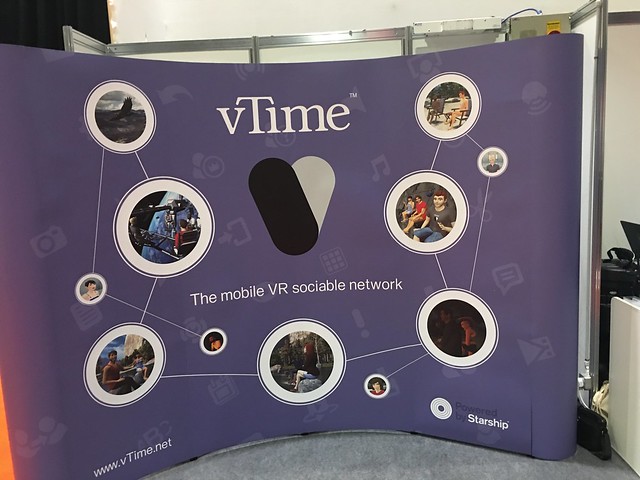 The preamble was good, and the demo was great and I wish them all the best of luck. It is a 3d chat room, avatar based where the users choose lovely rendered scene to sit in and converse, soon to share pictures etc. It is claiming to be a sociable not social network application. It is targeted at mobile first. I kept hearing the zuckerburg quote about one day people will just sit around a virtual campfire. Of course I was taken back to 2006, but tried not to get all grumpy and remind them everything old is new again. The campfire was a key part of the imagery and the experience we had online back then. Though then we could get up and walk about in the free form environment. In fact we still can, and SL had VR support. i.e. two cameras one for each eye. I still liked this new application, and if people connect and enjoy it, then so be it 🙂 I would dive in but it was focussed onto Gear VR and I only have my iPhone (and a load of things to drop that into to get stereo vision) The full post this was in to date it is here
Also Rita J. King was our embedded story teller/journalist and wrote tales from the fire pit to explain the rise of the virtual community powered by people, avatars and Second Life. The PDF of the story is here, and should be useful reading for the next wave of virtual environments. Headset or otherwise. I would say it is essential reading in fact 🙂
The economist had a stand showing a great use of virtual worlds. They have a reconstruction, from photos and other data, of the Mosul artefacts that have been destroyed due to the conflicts in the middle east. The VR was a little old fashioned, but the principle and content was good.
It was fun talking to the marker based AR developers, as they showed me things like book covers coming alive. Once again, I had to let them know I new a little about it and of course I tried to sell the idea in my books to people. If I had though about it I would have had a stand to show sci-fi novels about VR and AR and IoT with Reconfigure and Contxt 🙂
I mentioned serendipity in the title. I had tweeted my location as I got to excel, but then not checked twitter as I was going around the exhibits. As I tweeted I was leaving I saw that my colleague from way back Martin Gale was at the show, speaking and presenting. It was fantastic to catch up and see how well he is doing, quote the Fast Show, ‘Ah Ted” multiple times. Thank you for the coffee :). It made a great end to a fantastic day out. A day in which I got to practice a little of what I will be doing in the very near future, around the subjects that I will be immersed in. I guess in startup terms someone would call it is pivot. There I go teasing again. Watch this space, if you are interested 🙂