I had not got around to posting for a while despite lots of interesting things happening in the World. Primarily this was because on Easter Sunday whilst cooking a roast dinner somehow I managed to slip on oil on the kitchen floor and head butt the work surface on the way down. I/we think this is what happened as I was pretty concussed and the family did not see me go over. They just knew I was on the floor and there were garden peas all over the place. I seem to have been heading to drain the saucepan, but didn’t quite make it.

I knew I was not OK but kept saying I was in my confusion. There was no blood and the bump had not formed yet, but I was driven too Basingstoke Emergency room. I was seen very quickly as head injuries or the level of confusion I was exhibiting need sorting out quickly.

I was asked what happened, but I didn’t really know, also if I had been drinking, which I hadn’t except for a sip of a G&T. I was too busy preparing a meal for 6 of us. I got sent straight to a CT scan and when that was all clear I was discharged but told to not be left on my own for the next 48 hours in case of any complications

The advice was to rest, and so I went from doing lots of exercise ever day to almost nothing.

That first week was a very strange experience. I likened it to being stuck on a very long flight and sort of zoning out. I watched loads of movies as I couldn’t face playing any video games. However, I can’t actually remember which movies I watched, or if I can I can’t think what happened in too much detail. It is hard to tell if this was the brain impact or the stress of thinking about the incident.

Even more strange was the following weekend I realised I had missed buying Mortal Kombat 11 on release day. I went to get it and saw that I had in fact bought it during the week at some point. I then had to check my credit cards to see what else I may have purchased. Luckily not anything else!

That made for a doubly troubling state to be in. I was busy trying to piece to gather the gap in my memory of Easter Sunday, and the following days. Working in a job as an industry analyst where we need to remember what we see and hear it felt a bit like being a footballer breaking their leg. You know it will get better but will it work quite the same.

I started back doing light exercise, but didn’t go to Choi Kwang Do classes for a few weeks. In part this was to ensure that I did not get any bumps on the head (not that I would normally) but also I was not feeling up to driving.

Luckily with work it was a bit easier to do bits and pieces. Eventually things seems to be pretty normal. I was/am still wary but got back to it.

My first big test was driving 100 miles to Coventry to present to the BCS branch there. The driving was not the worry as much as just not being able to enthuse and deliver a presentation. However, it was game related and on a subject I live all the time too. It seemed to work, I was still able to do that. I drove home right after. When I got home I was totally shot though. Usually presentations take a lot of energy out of me because of the way I do them, but this was quite heavy.

The next big test was a conference in Cork. Flying really had me thinking, wondering if being pressurised was going to trip something. I was lucky it was a short flight though, less time to freak out about that. Also on arriving I was there with Christian Renaud, and we went out for a meal and a chat so I got to exercise my brain a bit in a normal situation. I did find I forgot a few things more than usual in general chatter but in part that probably always happens. Every slight stutter in my though patterns though I was analysing.

At the conference I was on a panel at one point and had to do some quick fire answers on artificial intelligence and industrial IoT. That seemed to work too though I think. The rest of the event went well. I took copious notes rather than relying on any short term memory.

One eventing we went and watch the awesome John Wick 3 and I can say I remember everything that happened in that still. So that’s a good progress marker.

The following weekend was my daughter’s 16th Birthday so a lot of things going on including a meal out to celebrate with her and some of her friends too. I don’t think I went to weird chatting.

Then I was back on a plane again and an 11 hour flight to California. I was off to the 10th Augmented World Expo. A full on event chatting with vendors and also meeting friends from a long time ago, back in the 2006 Metaverse days. My enthusiasm for the space of course carried me through, but equally made it all a bit tiring. Luckily I could pop back to the room in the hotel and just take 5 mins every now and then.

Reconfigure and Cont3xt were also free for the week so I did let everyone know 🙂 too. 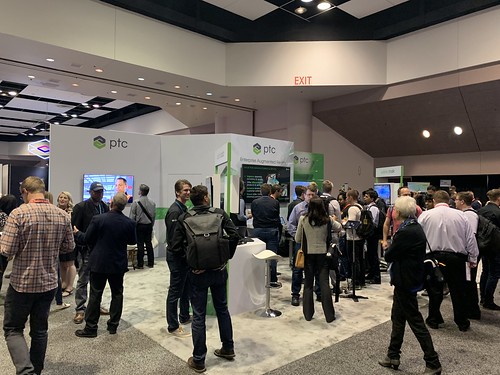 The hotel on the last night had a fire alarm that had us all out on the street at 1am, which is never good. No-one was hurt and about an hour later we were back inside.

I got back on Sunday afternoon, so Monday was mostly jet lag and doing expenses. No idea what happened Tuesday either. Wednesday I wrote a report which flowed nicely. The tiredness of jet lag masks most things. Yesterday (Thursday) though I had a hectic morning with doing a school run twice, early morning food shopping too. Then I had 2 back to back inquiry calls, where our customers pay to talk to us. So you have to be with it for that. At the end of the second one I couldn’t remember the name of a few companies, and then felt a little off. In part I thought this was because I was also trying to get back onto the diet regime again and maybe that was too soon. I ate a bit more healthy food and went to Choi. That all seemed to be OK but still felt a little off. Again, this may not be related but you start to doubt yourself I think. I felt a little off this morning too but dived into a report and avoided too many distractions. I think this will pass and is just another kick form the jet lag. It makes sense that it takes as long to clear jet lag as it does for the amount of time you are away.

Anyway, well on the way to normality again, whatever that is. I think like all injuries there are elements of feeling recovered but then overdoing it but exercise seems to be a good thing, lots of blood flow to the brain and positive thoughts.

All in all this could have been a lot worse, if I had still been 20 stone instead of 15 (and less soon) then the angular momentum of that additional weight might have knocked even more out of me.

Watch out out for oil on the floor. It reminded me of this public safety film, one of the many we had to watch in the 70s

Maybe time to bring these back ? 🙂