On Saturday we took a family trip to London to the Lee Valley Velodrome on the 2012 Olympic park site. We had tickets to see the Revolution series. Here various pro cycling teams and riders from around the world compete indoors on the banked circuit. WE had been to see some of the Olympics during 2012 but that was the gymnastics at the O2/Millennium Dome so we had not seen the big stadium, giant sculpture nor the velodrome yet.
As predlet 1.0 is currently on crutches, with a heavily sprained ankle, we chose to go overland from Waterloo station to the park in North East London. The cabbie set off North, but our visit clashes with the road closures for the Lord Mayor’s show. So after a u-turn we skirted around the city and then he headed up towards the Velodrome. It was a drizzly rainy day but we did get to see a lot of London.
The Velodrome itself is a fantastic looking building from the outside. 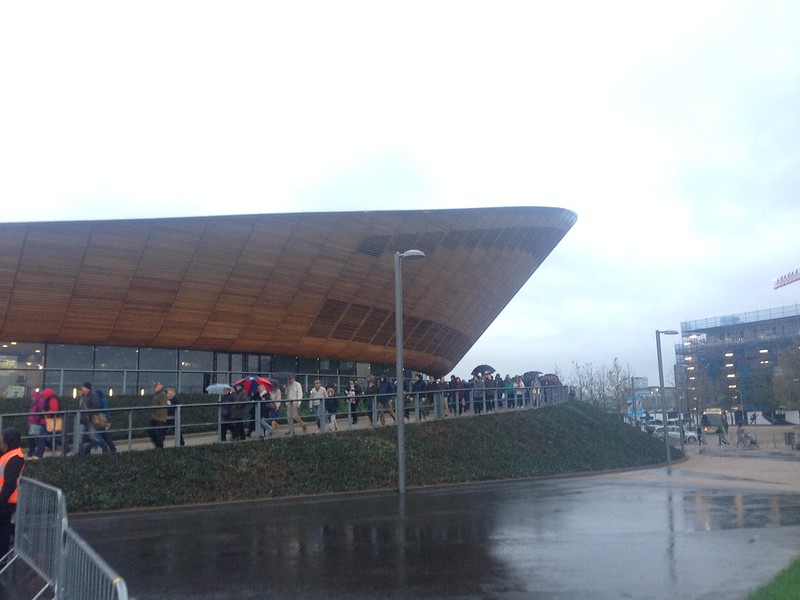 It is a huge bowed wood clad curve. The entire building is raised up on a plinth and the glass walls around appear to support the wooden structure. You are let in through an air lock in small groups. The idea is to keep the air and temperature stable inside to protect the track.
Inside it makes sense that the entire structure is raised up as the banked track is incredibly deep and steep.

There are two tiers of seating, but everyone can see everything. The riders and track were very close to our seats, and we got a good view down a straight.
The preparation area, for warm up and warm down is located in the infield. So there is always something going on, some form of activity.
We got to see several types of races and mass warmups around the track in between too. The first was with individual riders. It was just them against the track and the clock. Whilst not being bike racing affiecienados it was amazing how quickly we all saw the minute differences in technique and speed that led to different times. You just knew when the winning time was being made. You could feel the wonderful interlocking of all the training with the effort on the day coming into play. The first 200m race (which the clock started a little after the start finish line) was separated by milliseconds. The top time were around 10 seconds to cover the 200m, after 2 laps to wind up to the sprint.
The predlets had not really come across fixed wheel bikes but they soon got the gist of how they worked and the fact these athletes were traveling at over 40 miles and hour with no brakes.
The sprint races were great, it was very crowd friendly and we were able to cheer and support everyone, but particularly the locals. Everyone was cheered though. It is incredibly obvious the effort that they have to put in to be able to move at those speeds. The banked curves and the pressure to try and control the bike, choosing the right line etc it less obvious but was intriguing to watch.
The one on one races were interesting too. These are the ones where the try and catch one another out. They have three laps to complete, but the first one or two are done at a very slow pace, keeping an eye out for the break. The acceleration and power as they wind up the bikes means a fraction of a seconds jump on someone matters. Equally, go to early and you loose power or the other person gets a slip stream. Again these were easy to follow.
The most impressive races were the mass races of 20 or so riders. The Women’s race was 80 laps and the Men’s 120. They tended to stay in a streamlined group unless one chose to break away. Every 10 laps was a sprint lap with points awarded for the top people crossing first. Extra points were on offer for lapping the field. Here is got a bit confusing, the comentator did their best but we got a bit lost as to the rules. When and where the lapping occurred and if it got reset after the sprint lap. It was very impressive though. a constant almost silent whoosh of power sooting past every 10-12 seconds. 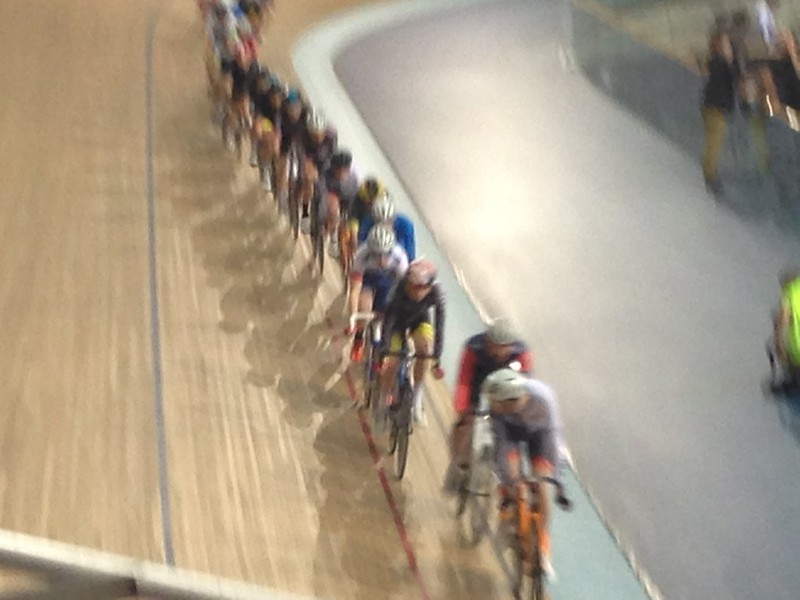 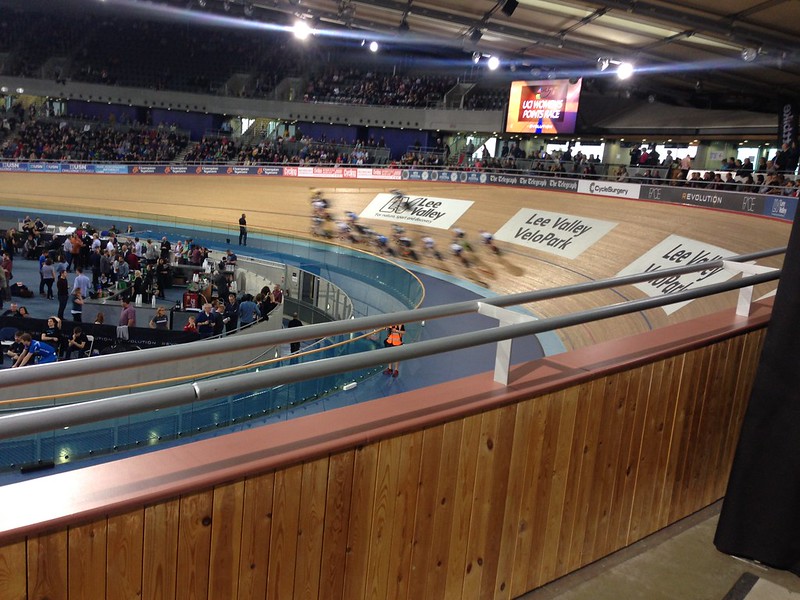 Another race format was the elimination. Each lap the one at the back dropped off until there were 10 then they raced.
The final race was the strangest. A large proportion of it involved not racing at all. It was called the Longest Lap. Here all the riders attempted to balance near the star finish line, on the banked straight. They had to stay upright, no crossing the line for 3-4 minutes. A foot down or holding on and they were out. Then the signal would go and they all raced form a standing start for 1 lap. About 1/3 dropped out before the race.
It was interesting, but seemed a little odd. Then I remembered we used to do this as kids. How long can you balance on your bike without moving. So it is not quite so odd. As a spectator sport watching people balance was actually good too.
We had a great time at the Velodrome. I have to say the tea at the canteen was great too. Lots of venues have food places that are pretty bad or just non-descript. The fresh crepes, cakes and tea at Lee Valley are very nice though.
I entitled this post human endeavour – it is what counts. The combined experience of the science and technology and engineering that created the building, with the effort that the athletes and their teams put in and the variety of experiences over and above just cycling fast combined with a willing and happy crowd of spectators was and is very uplifting.
Everything is about building and improving. That includes hard work and effort, that making it worthy of celebration.
The previous weekend we had our annual trip to see Jools Holland and his Rhythm and Blue Orchestra. It was another amazing show, as usual. In fact it was probably one of the best yet. It is another example where the hard work and effort of the musicians to learn their craft is celebrated by them sharing it with us. The dexterity of Jools Holland on the piano is stunning, the drum solo by Golson Lavis is always a fantastic highlight. Not only one of the greatest drummers ever, but he is there all the time for the whole 2 hour show. These solos everyone else leaves and lets him get in with it. Here is an example. It is well worth the listing to the whole thing and feeling the effort and the effortlessness combine with all his years of experience.

Everyone should have the opportunity to find their talent and to work at to, building on all that came before. It is human endeavour that counts.

With all my comments on needing to engage with virtual worlds and the olympics and the work I have done up to now with online sports representations is it really great to find an exemplar of a community driven collect of sports enthusiasts.
One great example is the Global Online Hockey Association In particular it is worth taking a look a Treet.Tv coverage of a live event held there on Jan 10th
Now there is a lot of passion and effort, plus community participation that goes into this, but when you think of the global budgets of the advertiser and sponsors of world sporting events this really is not very expensive! The same applied to Wimbledon in SL, which in reality I paid for the land and a few of us volunteered our time to build.
It is the fact that people with an interest and a passion can get an awful lot done themselves. However think about how all this could be made even better with just a little attention from an interested party.
For sports social media and virtual worlds need to enagage, for virtual worlds what could be more mainstream an example than sports? Much of the take up of Satellite TV in the UK was driven by people wanting to watch soccer.
Can virtual worlds and online interaction be the new Satellite dish?

For a while a few of us have been pushing the odd button, making suggestions and plays to various people that London 2012 really should have a rich and ground breaking virtual component. It could, after all, be the cheapest, yet most far reaching impact on the games and the future of sport.

Sport works in 3d, is rich in statistics, has global interest. Virtual worlds and social media fit very nicely into that space. What do we have for 2012 as a strategy? No idea, cant find one.

Still at least 2012 can be shown the way by what the Singapore 2010 youth games are going to do. This article on Virtual Worlds News shows the bids and sums involved (including my old firm, who’d of think it 🙂 ) You can build a lot of virtual world experience using the available tools and $10 million. Look what we did with no funding and crowd sourcing for Wimbledon in Second Life !

My door/email/twitter/avatars are open to be approached, we are all happy to help. The country has the skills, in fact some people are world leaders in the field, we also have a thriving games industry.