How did the freebie week do then? A week of just putting both Reconfigure and Cont3xt out there for download for nothing. Firstly thank you to everyone who downloaded the book(s) around the World, I had figures from lots of countries not just the .com and .co.uk Amazon sites. In total there were 373 downloads in those 5 days. It put the book up in the free charts and made for a very exciting few days watching the graph rise. I felt I was surfing a wave of interest in the story.
The cost of that free promo, if i had charged the normal Amazon price where I get 35% of the 0.99p it equates to £130.55. You can see you have to shift a lot of books, or charge a lot more and still shift them to make any sort of money for a novel. The 0.99 price point was.is an attempt at volume.
The free download though is way more effective, in my experience, than regular advertising. With that you pay if someone clicks on your advert, not if they buy you product. It is easy to spend hundreds trying to target the right audience. I even paid Facebook to boost my Reconfigure is free post for the week. That was £11 just to do that one post. It reached 1,018 people and there were 171 actions on it. It is hard to tell if those 171 actions were downloads of the book or not though. The systems are not so joined up as to be able to tell you that sort of intelligence.
Another interesting statistic is that 278 of the downloads were of Reconfigure, but only 95 for the follow up Cont3xt. Both were equally free, though I can understand in a series only grabbing the first. It may be that some of those 278 downloads might get read, and enjoyed and then come back for the sequel.
The World, characters and experiences I created didn’t exist before September 2015, and only started to be available for anyone else to experience in October 2015. Books take a long time to read, it is not a quick 1/2 hour TV series or a 5 minute YouTube. I now know there are lots of copies out there, ready to be taken to the next stage of discovery and enjoyment. That I count as a success. There are books that will ship 800+ a day, but that is a different league. My books can ship that many if need be, it is ultimately an on demand product and does not require me to do anything else to it. They are written, and I love what I have done.
With the excitement and the highs there is always a follow on low. As Amazon switches you from paid to free and back again the book ranking takes a bit of a hit. Obviously when you are free you are racking up free sales, when you go back again you are dropped back in having missed out on any sales, so it starts to tank. Unless lots of people rally and hear about the book and start buying it.As you can see below, the free book was getting right up onto the top line of the rankings in the top 1,000 of all books online, and top 50 of science fiction. Now the rank plummets, ready to start climbing again slowly.

I was asked if this was a good way to make a living? Having a good quality product, as the books seem to be really enjoyed by people who get to read them, is only part of it. It is an essential part of course. The rest though requires a lot of luck. I am already very active of social media, and have been for years, and I am I willing to try a share things in an unusual way. I feel for those indie authors that have worked hard on their books and are now faced with trying to establish a social media presence in order to get the books noticed by people. It is why there is a huge industry of people charging money to do the advertising for you. I have explored some of those, the auto tweeting to hundreds of thousands of people. It’s effectiveness is debatable. However, you want to buy the lottery ticket, just in case.
Which convinces someone to download a book more, an advert or something mad like the Marmite jars. 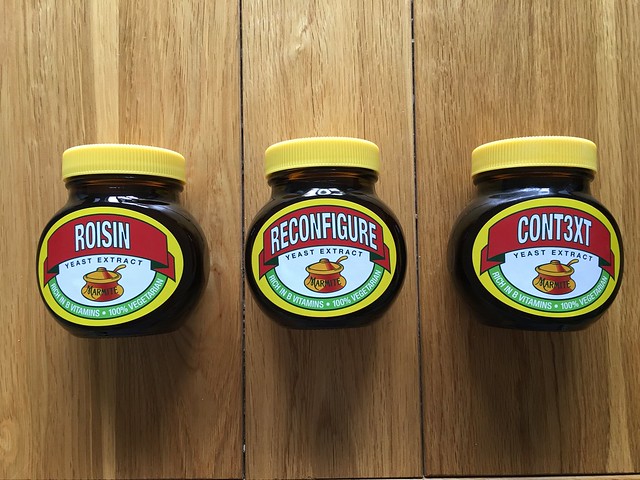 The answer may be neither, but I am having way more creative an intellectual fun trying these things out than the apparent mugging that occurs on regular online advertising. Well it was ONLY 373 and it was FREE so of course people would download it. That may be a though going through someone’s head. However, it is 373 downloads and everyone of them counts. Every potential reader, with it sat on their device, might get an fantastic kick out of reading it. Even one person loving it is a great result. If the book was not there, that would not happen. It is, they are, and it can.
I am still seriously considering how to tell the story in a way that fits the 21st century though. Game, machinima, Augmented Reality experience etc. That is because Roisin and her adventures are just freaking awesome 😉 Enjoy!