It has been quite a busy week of STEMnet activity. Being a STEMnet ambassador means helping schools and students however I can. Tuesday I spoke to a local secondary school teacher about all things emerging tech that might inspire the next generation. It was pretty much like rebooting Cool Stuff Collective. It is good to share my passion for new tech and some of the unusual twists and turns that I get to explore. This is all voluntary but it is still a service that I try and provide.
Today was a different event I joined about 20 other STEMnet ambassadors from all sorts of parts of industry, currently working and retired. We were at the Winchester Science Centre (I still call it Intech). It was where were shot one of the road trip episodes on Cool Stuff Collective. It was an event aimed at secondary school boys specifically. It was delivered as part of International Mens Day. This may seem strange to focus on us males in the workplace given there already lots of men in the industry. However, it is not always a good idea to ignore one part of society. These boys also needed the information and role models to talk to. So the excuse of a international day or event regardless of gender makes sense to catch some of them.
The day would work as well for groups of girls, the events and experiences were not specifically blokey.
We had groups building bristlebots and trying to make them go in a straight line. (These are DIY versions of Hexbugs. A bristle, like a toothbrush has a vibrating solenoid strapped to it. It causes the bug to shake itself forward in a very insect like way.
One of the very enterprising teams decided to forego the placing of pipe cleaners and weights etc to make the bug drive straight. Instead they build a rail system with straws as outriggers bolted to the bug bug much wider than it. It was a bit of a cheat, but as there were no rules I think it was a very cool build for the 15 mins they had.
The other even was trying to build a small ramps out of kinex and paper only for a micro RC car to jump off. The cars were very twitchy and it was q tricky task to even hit a ramp let alone build one. This made it even more entertaining to watch.
The final hands on was a robot arm test of teamwork. In cross school groups two people at a time had to control the arm and try to pick up the blocks. Every 30 seconds they were swapped out for other people in the team. 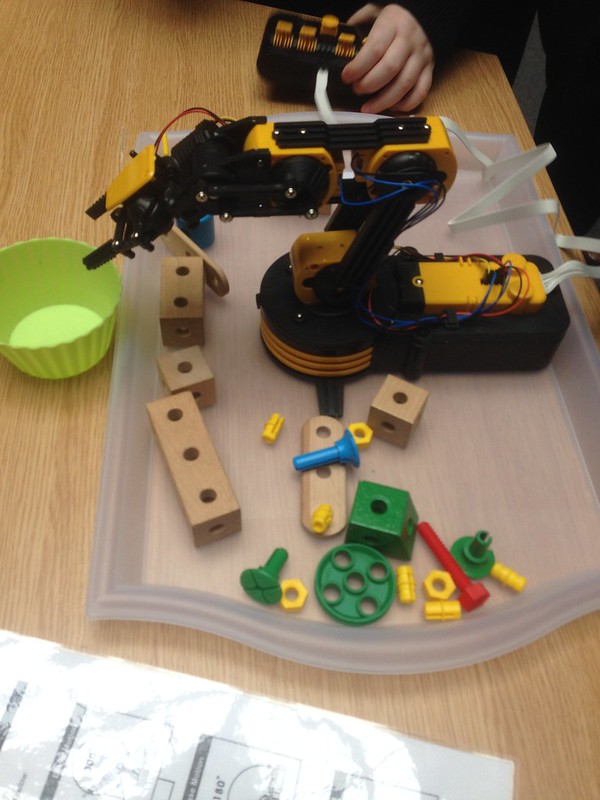 The final part was a speed networking. Each of us STEMnet ambassadors had table and every 4 minutes we talked to 5 students about our life and our work. We all had props. I had the MergeVR headset, my 3d printed Makie, my Flush magazine articles and of course a copy of Reconfigure I told them all about IBM and about virtual worlds and VR and the journey via TV presenting and now authoring. Still that I am a programmer, but that there is a lot they can chose to do.
One question I got was about whether it paid well. I explained a corporate job pays very well, but when you leave that money is a different matter altogether. Trying to sell a book to generate a bit of income, or chasing contracts of any value is tricky when you do leading edge stuff. I did explain that they should focus on IoT as a way forward. That would be a lucrative set of things to invent and get into.
After lunch we were treated to a full planetarium fly through. It was a bit like playing Elite Dangerous but we went out even further. The narrator/pilot was fantastic.
It was a very rewarding day indeed I think. It was also great to meet to many other people interested in helping others grow their STEM knowledge.