Last Friday I finished writing the story that I had in my head for Reconfigure. I surprised myself at the speed it came out, but when you have to do something, you have to do it! I also learned a lot about how I thread idea together. The story is set now, the tools and tech in it is, for the most part, genuine and real. Constructing it form the initial plan to the first draft has felt just like a software project. Architecture, Internal Design, Code. It now differs in that there is not a “compiler” to help spot any errors. There is of course spell check. This stage is one of reading it, lots it would seem. Checking it makes sense, meets the spec and then adding or taking away from it to create a good user experience. As it has a basis in fact there is real world continuity checking. There is also speculative science fiction continuity that I can double check too.
My biggest surprise was the elements of the story, the little mental pictures and feelings that I discovered on the way. I had the structure, that was fun to conceive but the colouring in has been an interesting mix of conscious thought and of Flow.
When I started to re-read it for the first time I was not totally sure what it was going to sound like in my head. A few times I have written articles and looked at the end result and started again. Same structure just different words. I was hoping that was not the case this time. Of course this is all potentially self deluding, but I like it so far.
Another thing I was not expecting is in building the potential for a follow up, if not a series. The core elements have several threads that seem to be brewing as I re-read the text. I was thinking this would be done and dusted.
I am looking ahead to just getting it out there, probably just on Amazon Kindle store. I don’t think I can justify making actual print copy books though services like LuLu do over print on demand. So I have to think about pricing. There, like the app store, seems to be lots of discussion of people not paying over $0.99 or 99p for a book. Discussions of free, just for the publicity or of making something reassuringly expensive because it has enough words per pence. I don’t know, but I think I will release it and see if I can charge for it. Just enough that maybe my social media friends and colleagues might feel happy to sponsor me by buying a copy.
I have started to consider cover designs, an early one, just an alpha (rather like the text so far) was this last night. 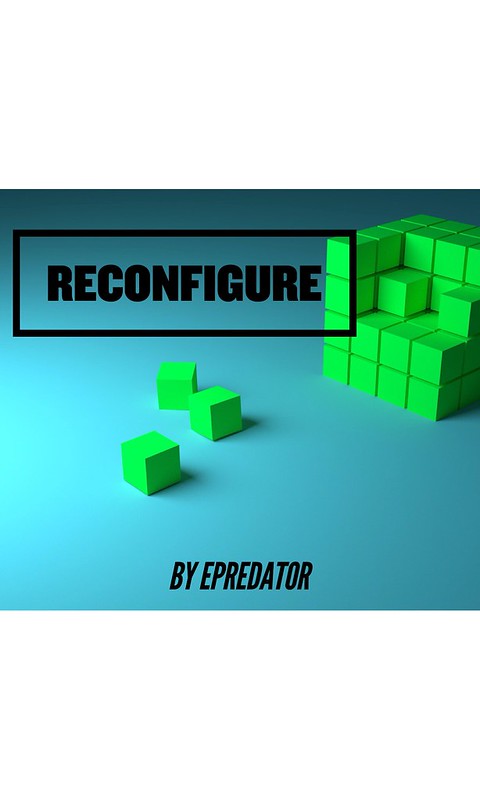 It was using the iPhone app Typorama. I will have to rebuild the image in the right size and shape and may make the cubes in Unity3D instead of the stock image, that being more in keeping with the story.
I started to work on the back cover hook, the abstract. It was interesting trying o find a balance between telling the story and hinting at it. Introducing the central character and allowing her strengths and vulnerabilities to try and surface in a paragraph. I still have work to do on that but may share that in another post.