I tend to do the family food shopping, being based at home it is good to get out and head to the supermarket, rather than online deliveries. I usually head to Sainsburys because the local store has self scan as you go around. The handset lets you scan the items as you pack them in the bags in the trolley. You then just pay by handing the scanner over (apart from occasionally getting a full rescan by the till operator to check you are being honest), and pay. A benefit of this is that you entire shop is listed on the screen and the price of the item. It is building the list as you go along and giving an indication of the amount you are spending. As the device is so small it does not contain the entire product range/barcode and price references so it is connected to a local network. Interestingly, though, it does not process the multi-buys and offers until it is handed to the cashier. I think this may be partly a systems decision and partly beneficial as the bill is always less than your handset shows.The network connection becomes apparent when something goes wrong with it. Occasionally you scan an item and the device hangs for a little while. Very occasionally, as happened yesterday it hangs completely and looks like it is not coming back. As I was at the end of my shopping trip and heading to the till, I thought I would wait rather than just hurtling off to customer services. The device shutdown and rebooted. I thought at that point I would loose everything from my 45 minute self scanning and have to do the old fashioned way of taking everything out of the trolley and put it on the conveyor belt again. The screen sparked back into life and this happened. 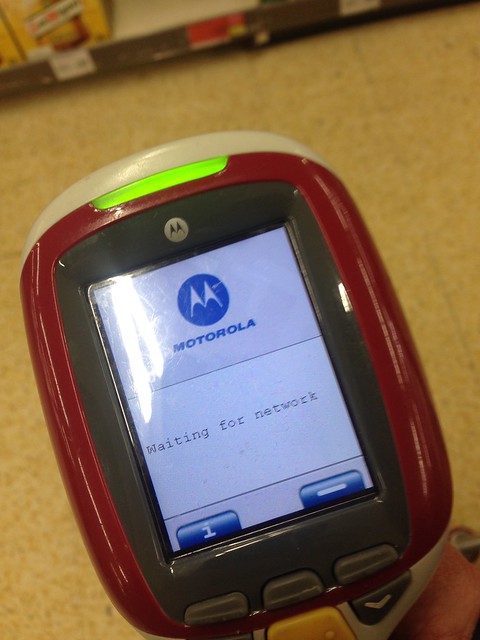 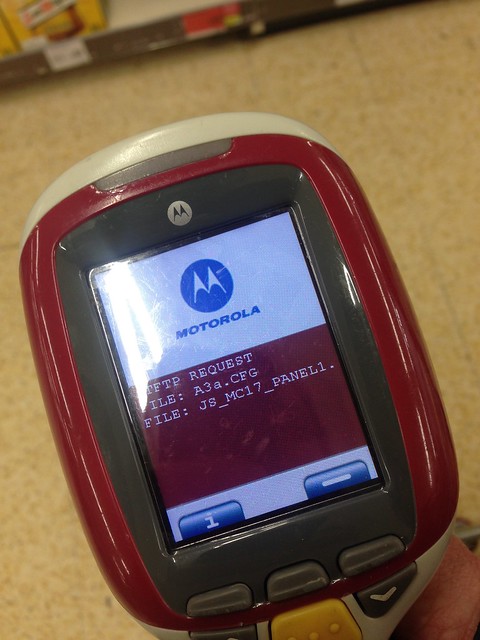 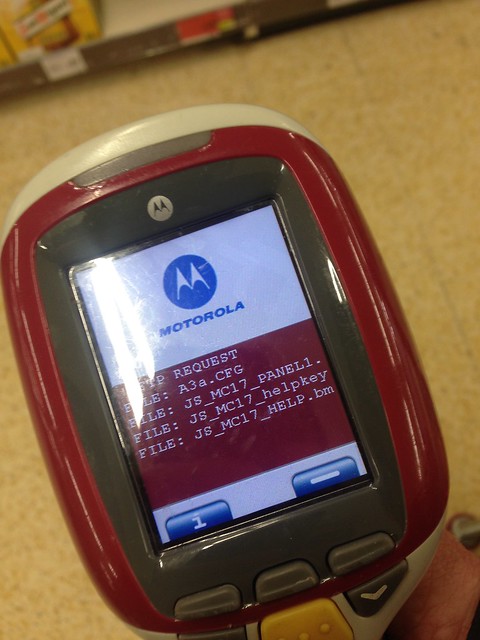 There were a few more screens but it as interesting to see the boot sequence.
Then all the data I had scanned appeared. It was probably only a minute or so, but I was very impressed that the system had a continuous backup, or maybe it is a local cache, of the details. I had to rescan my last two items, as they were the ones it had hung and crashed on, but it worked fine.
Retail is great at mining data and working out who buys what, I assume that they use richer data from the scanners to determine when something is bought. With this constant network connection there is scope for the next generation of these hand held units to deliver more than just the occasional information message.
I can imagine some less tech savvy consumers might be a bit freaked out by the apparently simple little listing device doing all this, and rebooting, which is why it is handy to have some background knowledge of the technology. It made it an interesting little sojourn and break from the current workload. It also showed we are already in an age of IoT, this constantly connected device sorted its own problems out and came back working. Lets hope all the new devices connecting can do the same thing.