I like to explore how things, usually tech related, end up feeling. The human experience is a central one that often gets ignored in any apparent automation or solving of a problem with tech. Products that we all get to use on a regular basis, or trends we buy into are obviously engineered into the user experiences and adverts and branding appeal to a sense of belonging too. Memory though, and how ‘into’ something you can be at any point in time is fascinating.
Many of us have had a few weeks away from training in Choi Kwang Do, classes are starting again this week. Four years ago, this month, predlet 2.0 and I knew nothing about it 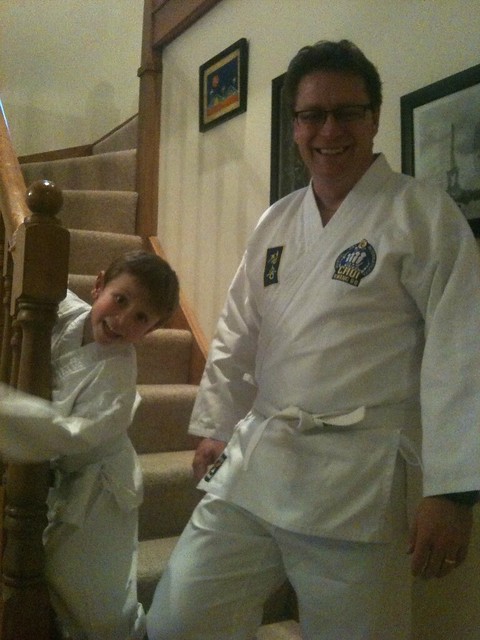 Constant practice, and constant learning maintain the philosophy, the physical flexibility and the combinations of movements in our brains and bodies. We are all aiming for it to be something we don’t have to remember, just something we do. The form and shapes are built to remember though. They have start and end points that match, making it suitable chunk for memory to deal with. It knows where it is going. Different belts layer upon the foundation, but the circular nature of memory and practice continues until it starts to become automatic. Though we all know we can always improve and there is always more to learn. It is still in there, ready for instant recall. I know I draw a blank sometimes in practice, when the subconscious and conscious get all mixed up with one another. The importance he is structure and pattern, and where it then goes awry with other types of activity.

Today I was back into my role as a writer/author/publisher/publicist for the first time for a few weeks. The holidays I had pretty much shutdown mentally on the subject. I was still very much following tech, seeing what was going on in the World, but my own self made World was on hold. Maybe there was the odd tweet or response to a reader, but in general I wanted to experiment with walking away from it for a few weeks.

My return needed a kickstart, that has been one that for the next few hours (until about 9am UK Wednesday 6th Jan 2016) of having Reconfigure available for free download. The Uk version is here US version is here

I had to do this to patch back in the feelings of urgency I had for people to read this story. It was still selling over christmas, even copies on xmas day which is humbling. It is still being read on the free library that Amazon runs to Kindle Unlimited. I needed to feel, and be abel to share what was going on and be back in the moment with it though. Obviously I hope I get more readers and reviews too.
This was also to cause a cascade kick start to editing the book I finished just before the holiday. To then start re-reading and editing Cont3xt, the follow up.
Now this is where it got a bit weird. As I started to read it again, I felt like I was returning home, filled with the buzz of the first book. I also though had not spent as much time going over the words as I had with the first one. So in many ways I had just written it and then forgot it.

In forgetting it, I was actually able to enchant and surprise myself at things I had created. I started to think if I had actually written the words. Obviously I did, but in such a state of Flow my conscious mind had not really taken it all in. It must have been there a little. Having read the first 1/3 of the book I remember the story board I did. However, my characters have said and done things that almost seem autonomous. That is a bizarre feeling.
Or at least is was until I related it to code. All my fellow techies out there will have felt the same. Even with code comments, returning to an intricate piece of code after a time away from it, maybe witting something else completely different, there is a sense of ‘did I write that?’ It can be dread at how bad it is, or elation at how clever or elegant it is. Code of course is built from some design or architecture, though that may be a mental model lost into the depths of the brain on the individual who did it. Code is an expression of that, but equally its an abstraction. You can exercise the code and read the code, plus look at the comments. So there are multiple ways to patch it back into your brain.

With a book its a bit different. You have to fund the emotions you felt, the tricks you were playing, with twists and turns, pretty much through the text itself. The storyboard certainly helps, but it seems a good test of the story if you can surprise yourself.
I had seen some writing help suggestions to metaphorically put the book in a drawer and leave it, before going back to it. It is an approach I think I can recommend. Whilst it has been a bit strange, I have gone back to something I like. That could of course go horribly wrong the other way or I am just delusional. Still I don’t have time for that sort of imposter syndrome problem that we all get.