We have arrived at 2016, it seems only yesterday that it was the turn of the millennium. 2000AD used to seem like the far flung future when I was about 10 years old. 1977 sat in a cinema watching the Star Wars universe explode on screen. As someone who lives and works on future and emerging technologies and trends the new year is always a time to take stock and see where the World is going. In 2015, after a few contracts and good paying work disappeared I was faced with a rather bleak future and no pipeline. It seems that every project, however clever, interesting or potentially lucrative that I have worked on in the past few years have all reached some sort of impasse. Rather than dwell on that our Family holiday in August gave me a flash of inspiration to try something a little different. Many of you who read this blog, or follow me on Twitter and Facebook will have been deluged with the results of that inspiration. That was of course writing and publishing Reconfigure. This near future science fiction is of course an adventure in ideas and concepts, but it is based on a lot of real tech and the real trajectory that it can take. It is also based in how it feels, the short comings of the tech experience, the human errors we make and the fragility of human experience. A struggle to stay on the right path. Roisin also uses a lot of game brain to solve things with a bit of flare and style. I have been reminded of her spirit this holiday by playing my xmas gift Just Cause 3. This is a prime example of free roam fun. You can explore so many ways to deal with situations, or you can just float around enjoying the amazing terrain.
The main character Rico, is dealing with a tyrant and having to pick away at the various bases, gaining them back under his control. Jets, helicopters, parachutes, wing suits, boats, guns, grenades, and the all important tether that he can fire to pull things around, all feature. 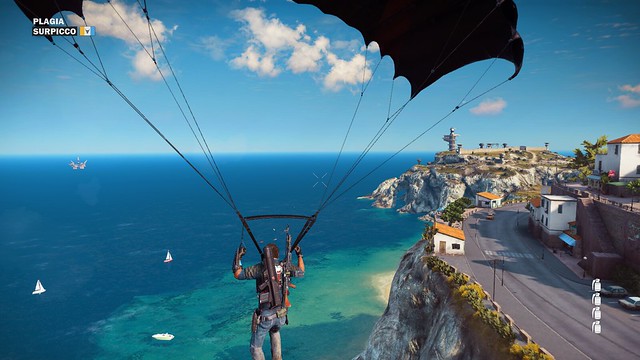 As I play it, it has can be frantic and tense at key moments, but it can also be relaxing and just virtual tourism really. Ascending a mountain monastery just to wing suit down the mountain, because you can is as much a part of it as the scripted missions. There is a world, but you can do anything, within certain limits. It is my enjoyment of this style of game that has led to even trying to write a book. There are no rules, apart from the rules that need to be set to make it make sense. Those rules are there to be subverted by some interesting twists and actions.

The book has yet to solve my problem of not having any serious pieces of work bringing in any money yet, and it may never do that, but it is there, very real and something I am very proud of. It has generated a spark of inspiration for me, a rejuvenation and belief in what can be achieved. That spark ignited into the writing of the follow up Cont3xt which is due very shortly out there. I have pushed even deeper in the the real technology of virtual and augmented reality but taken it further, but in a way that makes sense. So these books, and another one after that will act as my prediction for the future. Whether they provide anything else for my personal future I will just have to leave to luck, advertising and good friends sharing their existence.

So personally I have gone from a pretty depressing state of affairs, not seeing a future, to trying to create one for everyone else to immerse and enjoy. It has been a whirlwind and I will keep on riding this one. I will of course stay on the look out for some more ‘normal’ ways to make a living. It all adds to the richness of the experience though.

I wish everyone a happy, productive, fun and futuristic 2016. If in doubt just wing it, with style 🙂