We are on the cusp of a huge change in how we as humans interact with one another, with the world and with the things we create for one another. A bold statement, but one that stands up, I believe, by following some historical developments in technology and social and work related change.
The change involves all the great terms, Augmented Reality, Virtual Reality, Blended Reality and the metaverse. It is a change that has a major feature, one of untethering, or unshackling us as human beings from a fixed place or a fixed view of the world. 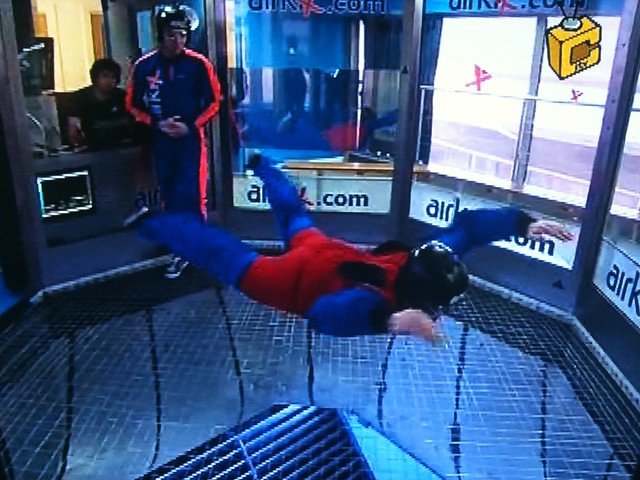 Here I am being untethered from the world in a freefall parachute experience, whilst also being on TV 🙂

All the great revolutions in human endeavour have involved either transporting us via our imagination to another place or concept, books, film, plays etc. or transporting us physically to another place, the wheel, steam trains, flight. Even modern telecommunications fit into that bracket. The telephone or the video link transport us to a shared virtual place with other people.

Virtual worlds are, as I may have mentioned a few times before, ways to enhance the experience of humans interacting with other humans and with interesting concepts and ideas. That experience, up to know has been a tethered one. We have evolved the last few decades becoming reliant on rectangular screens. Windows on the world, showing us text, images, video and virtual environments. Those screens have in evolved. We had large bulky cathode ray tubes, LED, Plasma, OLED and various flat wall projectors. The screens have always remained a frame, a fixed size tethering us to a more tunnel vision version. The screen is a funnel through which elements are directed at us. We started to the untethering process with wi-fi and mobile communications. Laptops, tablets and smartphones gave us the ability to take that funnel, a focused view of a world with us.

More recent developments have led to the VR headsets. An attempt to provide an experience that completely immerses us by providing a single screen for each eye. It is a specific medium for many yet to be invented experiences. It does though tether us further. It removes the world. That is not to say the Oculus Rift, Morpheus and HTC Vive are not important steps but they are half the story of untethering the human race. Forget the bulk and the weight, we are good at making things smaller and lighter as we have seen with the mobile telephone. The pure injection of something into our eyes and eyes via a blinkering system feels, and is, more tethering. It is good at the second affordance of transporting is to places with others, and it is where virtual world and the VR headsets naturally and obviously co-exist.

The real revolution comes from full blended reality and realities. That plural is important. We have had magic lens and magic mirror Augmented Reality for a while. Marker based and markerless ways to use one of these screens that we carry around or have fixed in out living rooms to show us digital representations of things places in out environment. They are always fun. However they are almost always just another screen in our screens. Being able to see feel and hear things in our physical environment wherever we are in the world and have them form part of that environment truly untethers us.
Augmented Reality is not new of course. We, as in the tech community, has been tinkering with it for years. Even this mini example on my old Nokia N95 back in 2008 starts to hint at the direction of travel. 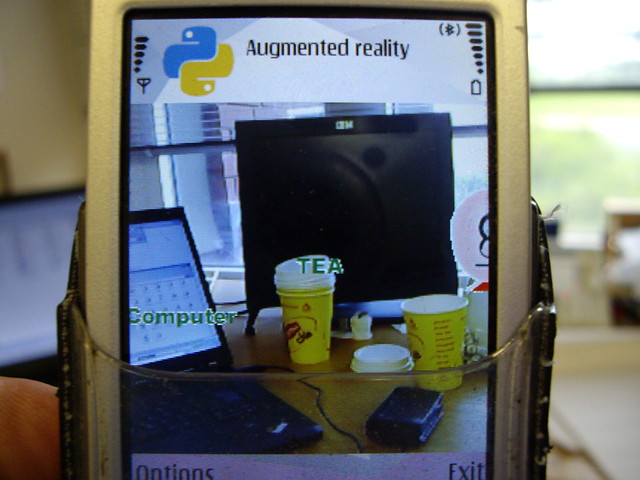 The devices used to do this are obviously starting at a basic level. Though we have the AR headsets of Microsoft Hololens, Google’s Magic Leap to start pushing the boundaries. They will not be the final result of this massive change. With an internet of things world, with the physical world instrumented and producing data, with large cloud servers offering compute power at the end of an wireless connection to analyse that data and to be able to visualize and interact with things in our physical environment we have a lot to discover and to explore.

I mentioned realities, not just reality. There is no reason to only have augmentation into a physical world. After all if you are immersed in a game environment or a virtual world you may actually choose, because you can, to shut out the world, to draw the digital curtains and explore. However, just as when you are engaged in any activity anywhere, things come to you in context. You need to be able to interact with other environments from which ever one you happen to be in.

Take an example, using Microsoft Hololens, Minecraft and Skype. In todays world you would have minecraft on you laptop/console/phone be digging around, building sharing the space with others. Skype call comes in from someone you want to talk to. You window away from Minecraft and focus on Skype. It is all very tethered. In a blended reality, as Hololens has shown you can have Minecraft on the rug in front of you and skype hanging on the wall next to the real clock. Things and data placed in the physical environment in a way that works for you and for them. However you may want to be more totally immersed in Minecraft and go full VR. If something can make a small hole in the real world for the experience, then it can surely make an all encompassing hole, thus providing you with only Minecraft. Yet, if it can place Skype on your real wall, then it can now place it on your virtual walls and bring that along with you.
This is very much a combination that is going to happen. It is not binary to be either in VR or not, in AR or not. It is either, both or neither.

It is noticeable that Facebook, who bought heavily into Oculus Rift have purchased Surreal Vision last month who specialize in using instrumentation and scanning kit to make sense of the physical world and place digital data in that world. Up until now Oculus Rift, which has really led the VR charge since its kickstarter (yes I backed that one!) has been focussed on the blinkered version of VR. This purchase shows the intent to go for a blended approach. Obviously this is needed as otherwise Magic Leap and Hololens will quickly eat into the Rifts place in the world.
So three of the worlds largest companies, Facebook, Google and Microsoft have significant plays in blended reality and the “face race” as it is sometimes called to get headsets on us. Sony have Project Morpheus which is generally just VR, yet Sony have had AR applications for many years with PS Move.
Here is Predlet 2.0 enjoying the AR Eyepet experience back in 2010 (yes five years ago !)

So here it is. We are getting increasingly more accurate ways to map the world into data, we have world producing IOT data streams, we have ever increasing ubiquitous networks and we have devices that know where they are, what direction they are facing. We have high power backend servers that can make sense of our speech and of context. On top of that we have free roaming devices to feed and overlay information to us, yes a little bit bulky and clunky but that will change. We are almost completely untethered. Wherever we are we can experience whatever we need or want, we can, in the future blend that with more than one experience. We can introduce others to our point of view or keep our point of view private. We can fully immerse or just augment, or augment our full immersion. WE can also make the virtual real with 3d printing!
That is truly exciting and amazing isn’t it?
It makes this sort of thing in Second Life seem an age away, but it is the underpinning for me and many others. Even in this old picture of the initial Wimbledon build in 2006 there is a cube hovering at the back. It is one of Jessica Qin’s virtual world virtual reality cubes. 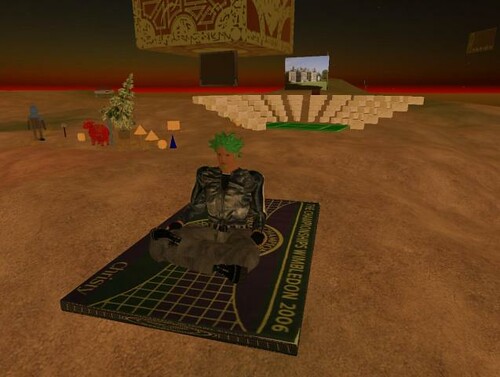 That cube and other things like it provided an inspiration for this sort of multiple level augmentation of reality. It was constrained by the tethered screen but was, and still is, remarkable influential. 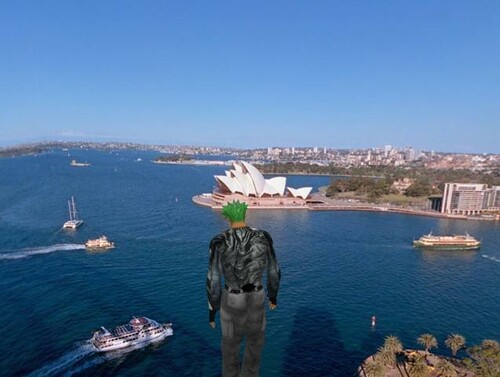 Here my Second Life avatar, so my view of a virtual world is inside 3d effect that provides a view, a curved 3d view not just a picture, or something else. It is like the avatar is wearing a virtual Oculus rift it that helps get the idea across.
This is from 2008 by way of a quick example of the fact even then it could work.

So lets get blending then 🙂