Yesterday Microsoft had a big series of announcement at its Build 2015 conference. The most exciting demonstration, IMHO, was on stage with Hololens. In this video they have a camera rendering the cameraman point of view of the digital content attached to real space, while the demo person is wearing their Hololens and operation from their perspective.

Taking applications that are floating in your heads up display, and attaching them to real world was, tables etc is very clever. Interacting with those objects even more so. The part at the end of this clip with the video screen and resizing it…. well who needs a TV now then?
This sort of blended reality (yes that term again I keep using as this is so much more than just augmentation of reality) creates a shared space that in this case the camera viewer is also allowed to see. However, as I mentioned in my last post there is no reason for the view to be the same or shared. Both modes can work. We can both be watching the same film but my weather desk object might be showing a completely different place to yours. Or we can how to completely different self contained shards of rooms yet in the same place. Throw in physical creation of objects in 3d printing or force feedback haptics and we have one heck of an environment to explore.
Microsoft have published a very slick video too of the hardware

They obviously have gone first on this tech but Google have Magic Leap waiting in the wings. There is a race on.
Whilst clearly many of us, not matter how much we have been around this sort of tech and around virtual worlds, are not going to just get sent a Hololens to build with we can still explore some of the principles using old fashioned tech like a smartphone and MergeVR/Cardboard etc and packages like Vuforia. Though Microsoft…. If you want to send me one or sign up a tech evangelist for this stuff (though it will sell itself) I am available anytime!
We have had AR to experiment with for a while but this wave is true 3d interaction with a markerless environment. Back in 2007! I wondered what it would be like to put an AR marker as a texture into a virtual world (in this case Second Life) and then point a camera with an AR application running at the screen that was rendering SL. 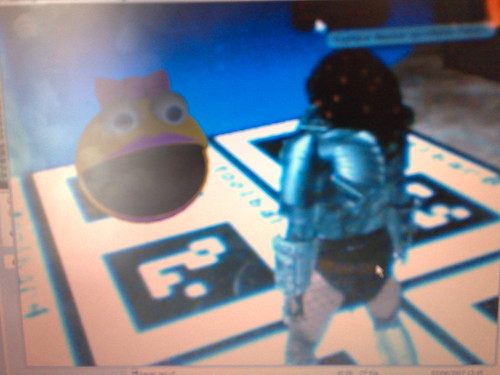 The result was that the Ms Pacman in this slightly blurry picture, is not visible to my epredator avatar in Second Life. That client only sees the marker. Yet as we pan the camera around or look at the marker the second application, which is an AR magic lens, renders Ms PacMan.
Blended reality does not have to be solely one layer into the physical world. It is the easiest to demonstrate but we have so many more choices to explore and opportunities.
I made a little video to show the basic Vuforia demos in Unity3d that are marker based. This stuff just works these days. It is less faffing about than it used to be. It is fantastic to see everything get so accessible and slick.

This is a tipping point. Virtual content, virtual environments, virtual worlds get even more engaging with the more direct natural inputs we can make to our body. Full VR is able to remove the world and drop you somewhere that you can’t be or that doesn’t exist. Blended Reality is able to bring things that don’t exists to the space you inhabit. The interaction metaphors are going to be interesting too. Do you render a virtual waste bin to throw throw applications into when done or do you map that to a small crackling virtual fireplace that sits in the actual fireplace in your living room?
I am going to stop listing things as this will go on for a while. Time to go and build some things to share later.