Many years ago a few of us had early access, or nearly early access, to some interesting brain wave reading equipment from Emotiv. This was back in 2005. I had a unity arrive at the office but then it got locked up in a cupboard until the company lawyers said it was OK to use. It was still there when I left but did make its way out of the cupboard by 2010. It even helped some old colleagues get a bit of TV action
It was not such a problem with my US colleagues who at least got to try using it.
I got to experience and show similar brain controlling toys on the TV with the NeuroSky mindflex gym. This allows the player to try to relax or concentrate to control air fans that blow a small foam ball around a course.
So in 2013 when Emotiv announced a kickstarter for the new headsets, in this case the insight I signed right up.
We (in one of our many virtual world jam sessions) had talked about interesting uses of the device to detect user emotions in virtual worlds. One such use was if your avatar and how you chose to dress or decorate yourself caused discomfort or shock to another person (wearing a headset), their own display of you could be tailored to make them happy. It’s a modern take on the emperors new clothes, but one that can work. People see what they need to see. It could have worked at Wimbledon this year when Lewis Hamilton turned up to the royal box without a jacket and tie. In a virtual environment that “shock” would mean any viewers of his avatar would indeed see a jacket and tie.
It has taken 2 years but the Emotiv Insight headset has finally arrived. As with all early adopter kit though there are some hiccups. Michael Rowe, one of my fellow conspirators from back in the virtual world hey day, has blogged about his unit arriving
Well here is my shiny boxed up version complete with t-shirt and badge 🙂 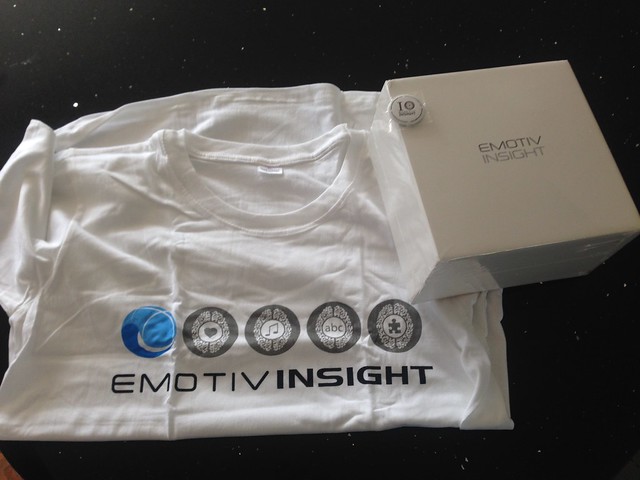 The unit itself feels very slick and modern. Several contact sensors spread out over your scalp and an important reference on the bone behind the ear (avoid your glasses) needs to be in place.
Though you do look a bit odd wearing it 🙂 But we have to suffer for the tech art. 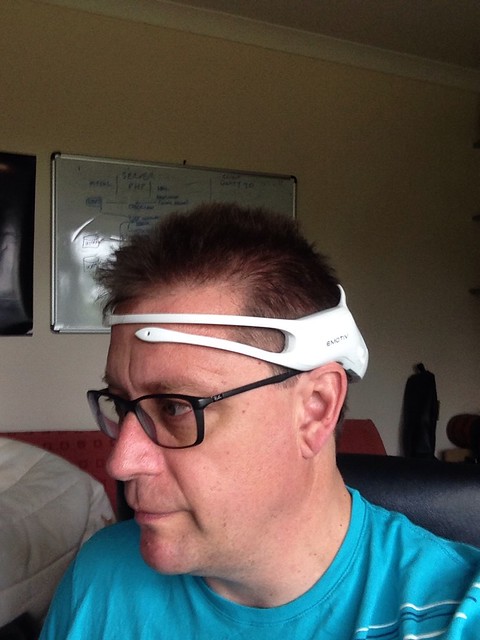 I charged the unity up via the USB cable waited for the light to go green. Unplugged the device and hit the on switch (near the green light). Here I then thought it was broken. It is something very simple but I assumed, never assume, that the same light near the switch would be the power light. That was not the case. The “on” light is a small blue/white LED above the logo on the side. It was right under where I was holding the unit. Silly me. 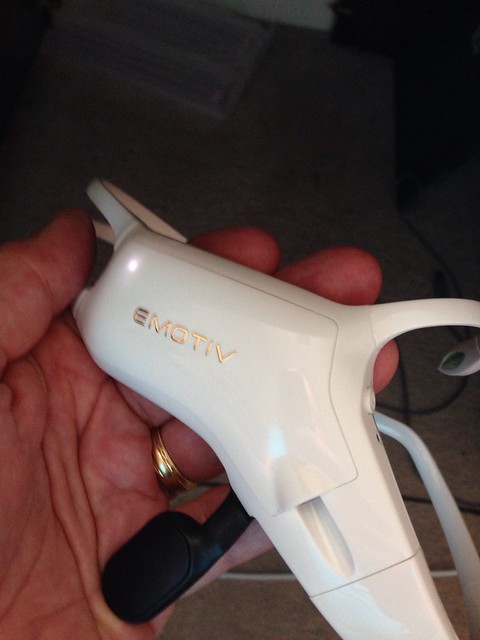 I then set about figuring out what could be done, if it worked (once I saw the power light).
This got much trickier. With a lot of Kickstarters they all have their own way of communicating. When you have not seen something appear for 2 years you tend not to be reading it everyday, following every link and nuance.
So the unit connected with Bluetooth, but not any bluetooth, it is the new Bluetooth (BTLE). This is some low power upgrade to bluetooth that many older devices do not support. I checked my Macbook Pro and it seemed to have the right stack. (How on earth did NASA manage to get the probe to Pluto over 9 years without the comms tech all breaking !)
I logged into the Emotiv store and saw a control panel application. I tried to download it, but having selected Mac it bounced me to my user profile saying I needed to be logged on. It is worrying that the simplest of web applications is not working when you have this brain reading device strapped to your head which is extremely complex! It seems the windows one would download, but that was no good.
I found some SDK code via another link but a lot of that seemed to be emulation. It also turns out that the iPhone 8 updates mashed up the Bluetooth LTE versions of any apps they had so it doesn’t work on those now. Still some android apps seem to be operational.
I left it a few days, slightly disappointed but figured it would get sorted.
Then today I found a comment on joining the google plus group (another flashback to the past) and a helpdesk post saying go to https://cpanel.emotivinsight.com/BTLE/
As soon as I did that, it downloaded a plugin, and then I saw the bluetooth pair with the device with no fuss. A setup screen flickerd into life and it showed sensors were firing on the unit.
The webpage looked like it should then link somewhere but it turns out there is a menu option hidden in the top left hand corner, with a submenu “detections”. That let me get to a few web based applications that atlas responded. I did not have much luck training and using it yet as often the apps would lockup, throw a warning message and the bluetooth would drop. I did however get a trace, my brain is in there and working. I was starting to think it was not!

So I now have a working brain interface, I am Borg, it’s 2015. Time to dig up those ideas from 10 years ago!
I am very interested in what happens when I mix this with the headsets like Oculus Rift. Though it is a pity that Emotiv seem to want to charge loyal backers $70 for an Emotiv unity plugin, that apparently doesn’t work in Unity 5.0 yet ? I think they may need some software engineering and architecture help. Call me, I am available at the moment!
I am alos interested, give how light the unit is, to trace what happens in Choi Kwang Do training and if getting and aiming for a particular mind set trace, i.e. we always try and relax to generate more speed and power from things that instinct tells you to tense up for. Of course that will have to wait a few weeks for my hip to recover. The physical world is a dangerous place and I sprained my left hip tripping over the fence around the predpets. So it’s been a good time to ponder interesting things to do whilst not sitting too long at this keyboard.
As ever, I am open for business. If you need an understand what is going on out here in the world of new technology and where it fits, that what feeding edge ltd does, takes a bit out of technology so you don’t have to.