I was probably not expecting this blog to end up as a gym bore, but as this is tech and IoT related but blends with Choi Kwang Do I think it can be excused. Number are all relative, regardless of the units or apparent speeds and counts they need to have previous states to compare them to in order to make sense. (Something we see all the time in IoT analytics 🙂 )
I have had a few sessions of the 2min, 1min, 30 sec punches to see how the punch count and power is affected, plus to track if I am getting anywhere with the training. I have also mixed and matched going for power with just sheer punch count, both variant of a PACE drill for hi intensity bursts. I am not neglecting the kicks or other techniques, but theses are what I can record.
Over a few session I tried 3x1min30 rounds with the aim to get the punch count consistent and fast across each. Around the 3rd go at this I managed to get over 200 strikes per round and the same 8mph avg velocity across them. The recording of what was a straight or a power shot is a little distorted as I am not using boxing strikes so may be confusing the kit. It does show favouring the right 366 strikes to 246. Even when I thought I was using both side equally, so that is a handy insight. It is probably the really fast combinations have an extra start and stop on the right so I can work on that. Thats 136 strikes per minute, which is wonderfully surprising to be able to achieve. I will revise that as a bench mark in elements of the training, to see if power increases over time.
The other metric was to start to do PACE rounds with decreasing amounts of time 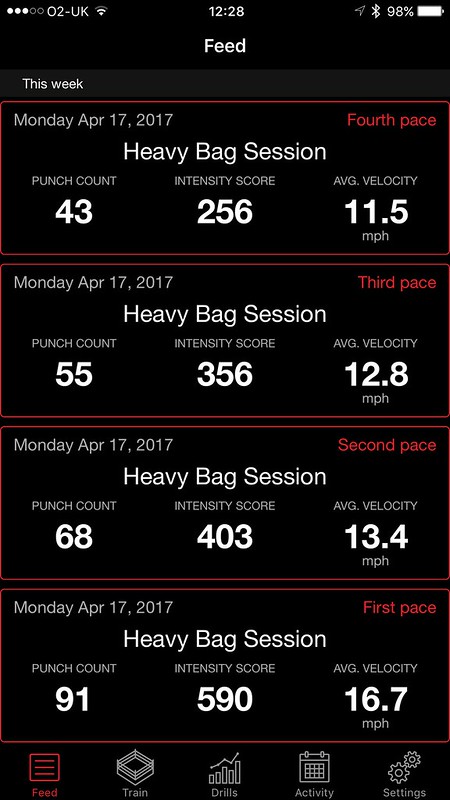 In this one (above) the First round at the bottom is 2mins steady heavy but controlled strikes, 91 at avg 16.7 mph (Twice the velocity of impact of the flat out drills). Each session then seeks to up the pace but reduce the time. This worked out quote well as the velocity only dropped from 16.7 to 11.5 but it still meant a punch rate of 172 per second on the 15 second flat out round. After this I went back to flowing pattern drills and gave my body a rest from impacts, but just out of interest when I was the most relaxed I tried pure concentrated power. By this time there is not energy to think about hitting hard, only relaxed efficient movement, which is what the aim is to produce.
The following was 16 strikes going up from punches to reverse knifehand. 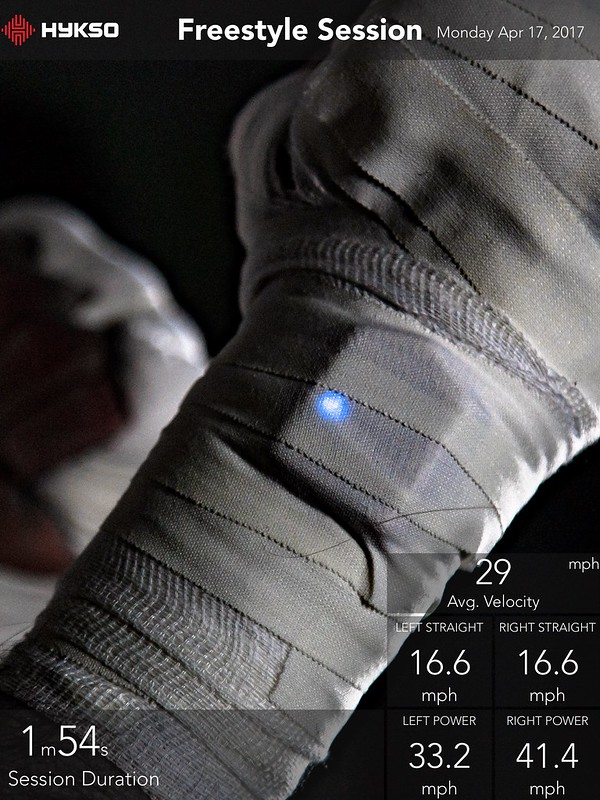 The punches came out at 19mph but the reverse knife hand hit 45 mph. Whether these numbers are right I am not sure, but previously a standard punch was registering at 10mph when I was not so worn out, and a reverse knifehand was 24mph.
To be scientific, I isolated these again. So this is right at the end of a training session. Both right and left rear hand rear inward punches (with a stance change) followed by right and left hand rear reverse knifehand. Just 4 strikes, and sure enough it registered in a similar. 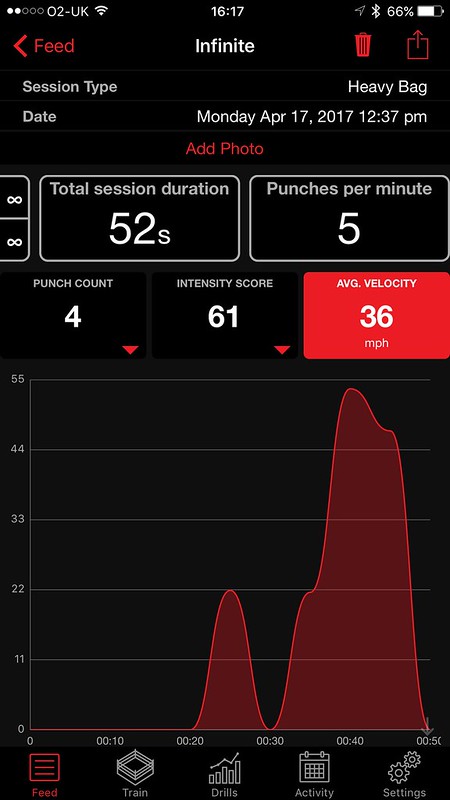 2 punches at 22 and two reverse knife hands one at 54mph and one at 47mph.
What this shows is that the principles of our training in being as relaxed as possible to generate as much power as possible, whilst they often feel at odds with one another, are in fact true. Fluidity of motion comes with years and years of practice, but wearing yourself out a little beforehand helps you practice technique in the right way.
It is nice to also just get away from the numbers and get into the patterns and the mindset too, focussing on targets can be distracting so its good to mix and match.
Pil Seung!