I had a trip to Jersey this weekend, sponsored by Jersey BCS so that I could be an out of town judge at the #hackjsy game development event. The focus here was for teams to build something in 36 hours, game related. With my BCS Animation and Games specialist group hat/badge on it made a lot of sense to to and see what was going on.
I also treated the trip as a re-aquanting myself with travelling on business, the family getting a chance to see I am now there all the time, but just for a short first stint. I also thought I would test out the new clothes for travel comfort. That test worked, but in a way I was not expecting. I usually have been wearing combat trousers and my phone sits nicely in the leg pocket. Instead it was inside my new jacket/ waistcoat arrangement. As i parked the car at the airport and hoofed my overcoat on with a hunch of the shoulders, my iPhone 6s plus felt the urge to slide upwards out of the shiny new pocket and propel itself face down onto the floor. I knew it was not going to be too well but I was surprised at just how smashed it made itself. 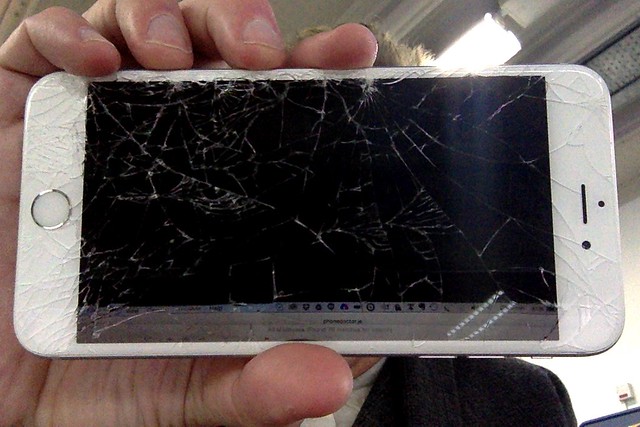 It was completely unhappy with any sort of interaction. I couldn’t power it off with a slide either. I tried the power and home button together for a few seconds and it shutdown. The Jersey flight is inly 40 minutes in a turbo prop but they don’t like phones being on. It is not so bad these days to be without a phone as if you have a laptop/pad etc wi-fi is readily available, so I let home know I was not going to be texting and Jersey know I was not going to be ignoring them if they called.
The hackathon was great though. 9 teams building stuff in all sorts of ways. javascript, node.js, python, unity3d, ruby, stencyl and a raspberry pi all featured across the projects and we had a hard time judging down to 1, 2, 3 and the special WTF award.
Whilst there I got to talk to a lot of people from all over the island in different industries. It was great to catch up with the guys from vizuality as they are making huge strides in the areas of installation experiences using VR. Tracking users in a 10x10m space and providing headset visuals as they wander around.
I spent the Saturday hacking too. I looked a little in IBM Bluemix and its Unity api for text to speech, using my own book quotes to see if it could cope. They all still have trouble pronouncing Roisin though 🙂 I also then spent a bit more time on my Vuforia AR covers for the books. I decided that Reconfigure should have the variant of the block world view that Roisin sees and builds in her own Unity application.

Then on Cont3xt I explored writing a scene changer, so at certain intervals the models and view would swap. Initially I did that by toggling the image targets, but that did not trigger the re-viewing of them, as it expected the same target to have the same stuff on it. However, swapping the game objects attached in the tree, turning them on and off worked, just as the animation works. So I now have a little bit of authoring infrastructure that makes it easier to add multiple scenes and play through them.
I was going to do something with the leap motion sensor too, but that fitted more with having an AR headset to interact with the book covers, with a broken phone and other judging work to do I parked that one.
I also had a lot of conversations around IoT in various forms, and a bit of a chat about blockchain too. Jersey may only have 100,000 people on it, but there is a vibrant tech community there. It was a great trip, and the phone is now repaired (the Jersey shop wasn’t able to do 6s plus so Apple Basingstoke did it in 1 hour) It also now has a proper case. I had avoided that for ages, not having broken the phone before. Rather than take a picture of the phone in a mirror to show the case, I sparked up the AR unity, put the Reconfigure picture on the phone and then the mac did its thing and rendered Roisin, holding her phone with a view of the world that she sees. 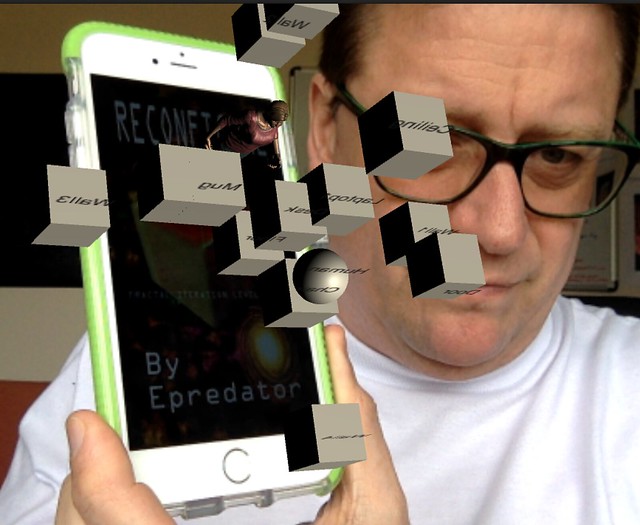 Just to re-interate the loops within loops here. I am rendering an AR representation using Unity3d and an Iphone onto a digital version of the cover of the e-book that contains a story about Roisin discovering a way to see the World in terms of position and labels that she expands on by writing an application in Unity that tuns on her iPhone. I will share this post on Twitter. The same Twitter (happy 10th birthday) that she uses to accidentally discover her new found abilities when she accidentally types into the wrong window. Meta enough ? 🙂
Anyway, well done everyone at #hackjsy, great organization, great participation, great fellow judges and a great island. See you all again soon I hope.