Wow. It is seven years since I started Feeding Edge Ltd. That is quite a long while isn’t it? The past year has been a more difficult one with less work in the pipeline for most of it. It has meant I have had to take stock and look to do other things, whilst the World catches up. It does seem strange given the dawn of the new wave of Virtual Reality, and Augmented Reality that I have not managed to find the right people to engage my expertise and background in both regular technology and virtual worlds. In part that was because I was focussing on one major contract, when that dried up suddenly there was no where to go. It is starting from zero again to build up and sell who I am and what I do.
My other startup work has always been ticking along under the covers, as we try and work the system to find the right person with the right vision to fund what we have in mind. It is a big a glorious project, but it all takes time. Lots of no, yes but and even a few lets do it, followed by oh hang can’t now other stuff has come up.
On the summer holiday, I had a good long think about whether to give this all up and try and find a regular position back in corporate life, I was hit with a flash of inspiration for the science fiction concept. It was so obvious that I just had to give it a go. That is not to say I would not accept a well paid job with slightly more structure to help pay my way. However, the books flowed out of me. It was an incredibly exciting end to the year. Learning how to write and structure Reconfigure, how to package and build the ebook and the print version. How to release and then try and promote it. I have learned so much doing it that helps me personally, helps my business and also will help in any consulting work I do in the future. I realised too that the products of both Reconfigure and Cont3xt are like a CV for me. They represent a state of the virtual world, virtual reality, augmented reality and Internet of Things industry, combined with the coding and use of game tech that comes directly from my experiences, extrapolated for the purpose of story telling.
Write what you know, and that appears to be the future, in this case the near future.
This year I have also been continuing my journey in Choi Kwang Do. This time with a black suit on as a head instructor. It has led me to give talks to schools on science and why it is important, with a backdrop of Choi Kwang Do as a hook for them. I am constantly trying to evolve as a teacher and a student. Once again the reflective nature of the art was woven into the second book Cont3xt. I did not brand any of the martial arts action in the book as Choi Kwang Do as that may mis-represent the art and I don’t want to do that, but it did influence the start of the story with its more reflective elements, later on a degree of poetic licence kicked in, but the feelings of performing the moves is very real.
I have continued my pursuit of the unusual throughout the year. The books as a product provide, rather like the Feeding Edge logo has in the past, a vehicle to explore ideas.
I still really like my Forza 6 book branded Lambo, demonstrating the concept of digital in world product placement.

If you have read the books, and if not why not? they are only 99p, you will know that Roisin like Marmite. Why not ? I like Marmite, again write what you know. It became a vehicle and an ongoing thread in the stories, and even a bit of a calling card. It is a real world brand, so that can be tricky, but I think I use it in a positive way, as well as showing that not everyone is a fan. So the it is just another real world hook to make the science fiction elements believable. So I was really pleased when i saw that Marmite had a print your own label customisation. It is print on demand Marmite, just as my books are print on demand. It uses the web and the internet to accept the order and the then there is physical delivery. I know its a bit meta but thats the same pattern Roisin uses, just the physical movement of things is a little more quirky 🙂 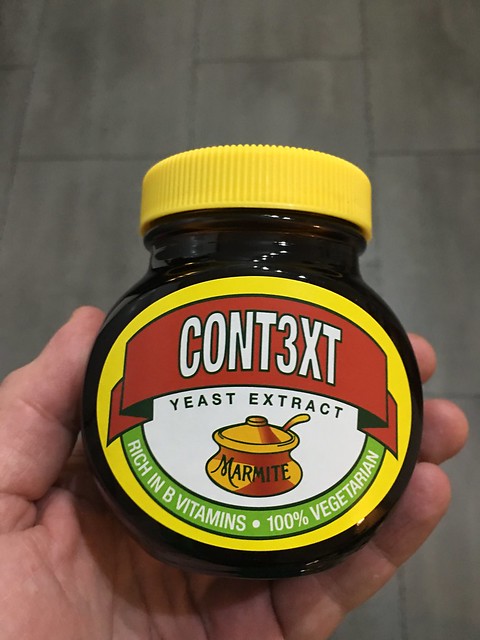 I have another two jars on the way. One for Reconfigure and one for Roisin herself.
I am sure she will change her own twitter icon from the regular jar to one of these later as @axelweight Yes she does have a Twitter account, she had to otherwise she would not have been able to accidentally Tweet “ls -l” and get introduced to the World changing device @RayKonfigure would she?
All this interweaving of tech and experience, in this case related to the books, is what I do and have always done. I hope my ideas are inspirational to some, and one day obvious to others. I will keep trying to do the right thing, be positive and share as much as possible.
I am available to talk through any opportunities you have, anytime. epredator at feedingedge.co.uk or @epredator
Finally, last but not least, I have to say a huge thank you to my wife Jan @elemming She has the pressure of the corporate role, one that she enjoys but still it is the pressure. She is the major breadwinner. You can imagine how many 99p books you have to sell make any money to pay anything. She puts up with the downs whilst we at for the ups. Those ups will re-emerge, this year has shown that too me. No matter how bleak it looks, something happens to offer hope. I have some new projects in the pipeline, mostly speculative, but with all these crazy ideas buzzing around something will pop one day.
As we say in Choi Kwang Do – Pil Seung! which means certain victory. Happy lucky 7th birthday Feeding Edge 🙂