I originally posted this on Linkedin, but felt I should have it here too. Working out the best place to put things often includes some re-use/re-posting. 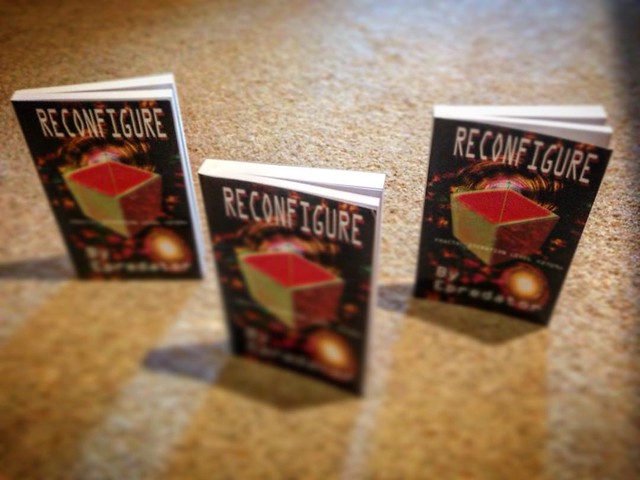 Ready to face the World on its own, growing up and leaving the nest.

It has been a steep learning curve, since September 2015, of writing, publishing and selling, this first novel Reconfigure. My initial surprise at managing to write it in a way that came out almost exactly as I had pictured it, was then met with the confusion of how to design, price and share it as a product. Each of the steps in that process I took decisions, some where more clear cut than others.

The price, of my precious creation, was the hardest. I thought that going in too cheap would make the work seem as if it was a throw away piece, published solely for reasons of ego. I thought if it was too expensive, it would of course not reach anyone, and how could I dare charge for something by an unknown writer. That was balanced a little by my own internal hype, that I felt I was not totally unknown. In reality in the sea of internet presences and products, we are all pretty much unknown, unless you count as a global multi-award winning superstar or win the viral lottery and have something to ride that wave with. They were not generally born with that popularity though. We are all just people.

People, many closer to me than not, seem to enjoy Roisin’s story. I have no idea what people from a wider more diverse circle feel about it, yet. I sit and worry about reviews, what if I get lots and they say it’s terrible. Equally I worry about people not reviewing because it is just not worth the bother to review. The book is not me though. Looking at it from it’s perspective, it is happy to be out there ready to be discovered. I have done what I needed to release the story. Now it is the books job to win people over. That way I can park this ego, or personal validation need, for downloads and sales and just try and help it along without it defining me.

That is all a bit deep, and potentially odd to hear. However, having written a second book I find my attitudes to its acceptance as part of the series to be different. I am going to send it out there, and whatever happens, happens. I can engineer serendipity a little, with mentioning its very existence, but I can’t make people want to read, or read it. If they want to they will. I do not have a corporate marketing budget to make it part of every waking moment in everyones lives. That would be horrible though!

Having run the free promotion days and seeing such a big difference in downloads, from the $2.99 book sales, it is clear that $2.99 is too much. That price point was slightly enforced by the structure Amazon sets. If you want to get 70% as a royalty you can only start pricing at $2.99, which becomes £1.99 in the UK, as a minimum rather than an exchange rate difference. As a new author, and doing all the work, my brain thought, “hey, 70% is a decent amount.” The other rate is 35%. For an ebook that seems woefully low. Yes there is storage of the data, the shop front etc., but Amazon are getting 65% at that low rate. My ego, not my business brain, felt that was wrong. So I couldn’t price any lower than $2.99. I think that may have been incorrect, and my heart leading my head. Getting the book out there is about volume, not individual profits. Whilst Amazon may be taking too much, IMHO, that is what they are taking, that is the playing field, the rules of the game. Amazon, of course, don’t actually care as a transport mechanism for my book or anyone’s. They thrive of volume, one product sold lots or lots sold of individual items. So self publishing might cut out a certain part of the middle man process, but it is not generally the creators of anything who gain the most financially.

With this in mind, I just made a chance and hit the button, not to go totally free and never get any financial recognition for the work, but instead to the enticing $0.99 or 99p in the UK and other regions. This may make a difference to volumes downloaded. With a second book, yet to be priced, it may entice two sales? Yes I have written twice as much, but 2 x 0.99 is better than 0 x $2.99 and I want people to just read it.

Will that make any difference? I have no idea. As with all these things there is an element of luck and timing, combined with anything related to the quality and the value of the work. It means I feel much more relaxed about Cont3xt now though. The first book, was as if I was buying a lottery ticket for the very first time. Excitement and nerves, hoping for a massive win. That could happen, and sometimes does, but most things require time and effort, presence and demonstration of ability in the field. I may have a long track record in emerging technology, social media, blogging, a bit of TV presenting etc. That does not entitle me to immediately burst onto the scene and expect critical and financial success.

With that new attitude, I can move forward and explore interesting story lines and ways to share them. The work is there if anyone needs it. It does not require my constant presence, it is a product, hosted and available 24/7. It is still my baby, as is Cont3xt, but they are growing up and leaving home. They still need my support, and they are very welcome of the support from everyone they have had so far too, as am I.

Reconfigure is available on Amazon in all regions as an ebook and paperback. Go and give it a try, and maybe write a review too?