Tomorrow I am heading to predlet 1.0 secondary school to talk to the year eight class (including predict 1.0) about programming, tech and interesting stuff like Internet of Things and what it is relevant to them. I am putting most of the same, but updated things in there to garner interest. The extra labelling of IoT to make things more relevant doesn’t alter the vector the the future I discuss is heading towards.
It is also a talk about how my career, or whatever this is called has flowed alongside new developments and of course I do also mention the book. It is relevant in several ways. The subject matter and being able to share and explain how a programmer’s mind or a gamer’s mind works is the obvious one. The ongoing story keeping up with and accelerating past the current technology, yet keeping it just possible is pretty much where I live as a technical evangelist. You have to know how things work, you have to be able to build things in order to help push things forward. Also the feedback loop of 3d printing creating objects that become inputs for IoT is still an incredible one to consider and share.
I also found that it became a relevant IoT(ish) example.
The book started as an idea, which became a digital product. Designed, published and sold from anywhere in the World. However, it became a physical object too. I was not planning that originally. The printed object takes up space and has a presence. A pile of them become things, not internet of things but things generated from the internet. They and the intangible ebook generate digital sales figures. Data that tuned for just me and my sales becomes the intelligence I act upon for the follow up book, for digital adverts etc. It also is part of the global sales figures, the charts the overall big picture from the big data on what is being read and sold. Products always have had this of course, but the figures are now instant. The ebook is able to be borrowed in a digital library and I get figures of how many pages have been read. The printed book can’t do that, yet. However, it could with the right devices as part of it. That would be useful for me, have people read it, where are they stopping, thinking time, heart rate for excitement, stress for complexity etc. The ebook is part way there, the physical is as far away as ever from that. The question then becomes, if we related that use case to something else would it be desirable and make sense to push the instrumentation further in the product.
Another gadget I may take with me is the Emotiv headset to show them. Oh! Look! it measures brain engagement, relaxation, stress etc. for the current activity. If it just knew which book, film, game I was reading, watching, playing then it could quite happily correlate and send this brain wave data to Amazon, on to the individual author, regardless of ebook or physical version. It could then also aggregate that all up into the big data picture. 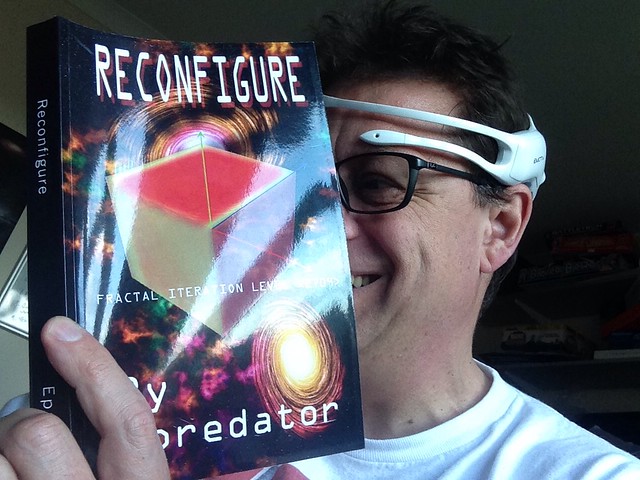 I generated a word cloud of the first chapter to. Everyone knows what a word cloud is now I think, but it can be a relevant example of making sense or trying to make sense of massive amounts of data. 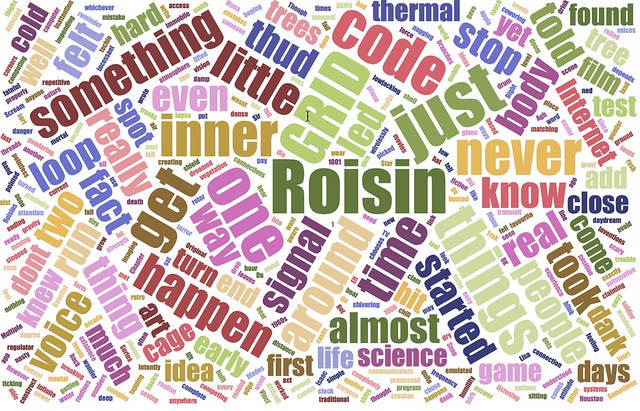 The instrumentation loop is here, the parts of it may not flow totally without friction but we can experiment with what might work, prototype then maybe build the proper versions.
I am also going to go a bit fractal thinking on them. Reminding them everything in computing is just adding up two numbers. The half adder circuit of an Xor and an And gate is the basis of it all. The number of times you it add up is what the computer leverages. From that spawns great complexity, and also great simplicity.
Then it’s Minecraft and python demo. Virtual world, code mixed maybe with a hololens video on the end, of Minecraft of course.