Over a year ago I got to play the beta, on the PC, of Elite Dangerous as one of the early backers on Kickstarter. I wrote a number of things about it and the Oculus Rift DK2 experience too.
I also got to Elite Dangerous on the Xbox One with the preview programme. This has been running for a good few months as this post where I mashed it with predators fighting in Mortal Kombat was back in July.
Elite Dangerous is now fully live on Xbox One. Having spent way more time on the preview version than on the full PC/Mac version I had built up a nice little ship and a decent buffer of cash. I was expecting to be reset completely for the full release. I had see reports we would get a cash value for our modules. Instead though, and thankyou Frontier, my ship is intact, as are my modules and my stats. The cargo I had on board suddenly said it was stolen, but that is a minor thing.
It may be some sort of gaming heresy, or cause a flame war, but I am enjoying the couch, controller big TV experience more than being sat at my laptop, even with a complicated stick arrangement. It may be because getting the right buttons to work with the VR headset and not be able to see the keyboard, the difficulty in driving the galaxy map in that configuration meant the console version seems slicker and easier. The PC has the ability to map controls to any of the multitude of buttons, for any control stick. The console only has the one controller type, (and the new fancy expensive controller too). The commands are mapped onto the buttons as menus. e.g. if you tap b it fires the boosters, if you hold b you get an onscreen menu with four directions to select landing gear, cargo scoop, lights etc. It means that you don’t have to hold that many things in your head as to which button to press. So if you don’t play for a few weeks you can still go back and the basics are there, but the on screen helps remind you. It was another problem with the VR headset on the PC that you lose any visual memory. You have to rely on finger position. Imagine trying to touch type and not be able to glance at the keys. Unless you are a real pro touch typer we all look at the keys at some point. It augments what our brain needs. The putts players of Elite will of course just know and hold the information, they will become like touch typers. I jump from game to game and I am past needing to memorise the complexity I think. It used to be fun to have obscure collections of keys but now it is less so.
Having got to keep the expensive collection of modules on the ship I got back to playing the game again last night. It hit one of this rare moments when the missions, the place in the vast depths of place and the time to just work it all aligned. It had taken months to kit the ship and get to the point of having a couple of million in the bank. As with all RPG’s there is grind required. You teeter on the edge of oblivion for a while. Then you plateau, before a new set of challenges make themselves known.
I started the session with this 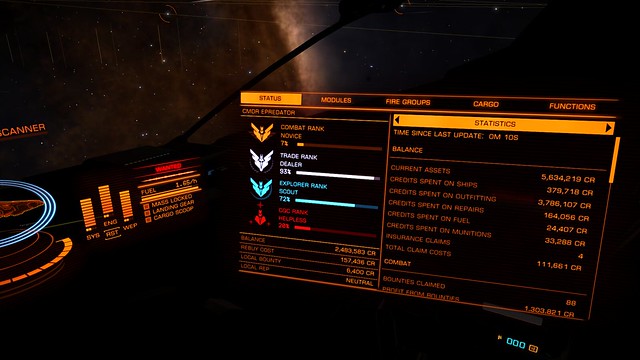 A balance of 2.4million in cash and a ship that had about 5.6 million on upgrades. After just an hour of doing a few missions in the rich vein I found it was. 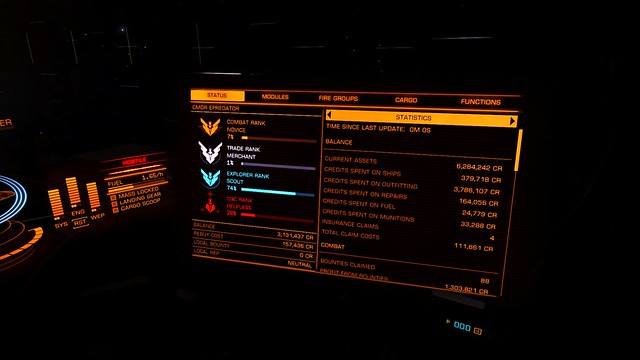 A balance on 3.1million. Nearly a million credits. Adding 30% to the amount I already had. If only real life skills generated this sort of return 🙂
The whole Elite experience may not be for everyone, it will be interesting how the console generation take to it. It is a game that requires a bit of a slog. The monotony is something that is part of what makes it so endearing. I do get lost in most games and films, this one even more so. I do engage in combat, when I have to, but prefer a more self defence than pirate attitude to that, most of the time. It is a pity I can’t have a crossover to Commander Epredator on the PC version. Each Commander Epredator inhabits the same universe at an economic and server level apparently. The Xbox is really a meta shard where just xbox users frequent.
Predlet 2.0 was badgering me to be able to play it too. I have set him up an account, though I just left him to it to see what the initial experience was like. After a few minutes he was back on Jurassic World Lego so I think the initial onboard experience may not be the sort of thing console owners are used to. Having been in on the beta there were very little instructional or intro parts. Training missions grew, but you just got used to fiddling around with the ship to see what happened. So For me I have a mental model of how it all works. I am still a little confused at the super cruise over shooting and rapidly accelerating at some of the space station targets but it feels like it is there to keep your attention.
Aside from the whole ultraHD thing that high end PC’s are starting to do I can see no difference in the loo and feel of the game across the platforms. So the ‘it’s better on PC’ can only really come down to how much you spend on your gaming rig. Spend more and it’s better, naturally.
I have also found that now I can multitask, as I tweeted last night, whilst travelling some of the longer distances I get to read a few pages of Reconfigure. Whilst you might get interdicted on a supercruise (that sounds odd, but it’s the words they use) I have enough time and enough defence capability to not worry too much. I put the kindle down and pick up the pad. It seems Elite Dangerous is crying out for a second screen app. It would be great to check things during hyperspace and super cruise whilst keeping the onscreen space view. The VR experience has the ability to look left and right and the terminals pop up with info, floating for you. The Xbox does that too with freelook, clicking the right stick moves to freelook. Though in reality its easer to lock and zoom into the screens. In VR you can lean forward to see the AR screens better. The photos above are of the locked in view not the floating view. So a second screen view of all that, the ships systems, reconfiguring things etc would be a great addition. I know I would use it. Of course that would not work so well on the PC and Mac, though with the Xbox becoming a Windows 10 machine the crossover might get easier?