Free roaming role playing games are one of the most intriguing style of games and experiences to engage with IMHO. I use the word experience, not just games, in order to encapsulate the social environments and metaverse’s such as Second Life, Hi Fidelity et al. However I also did not just restrict that first sentence to include online massively multiplayer/multiuser online. There have been two significant release the past few weeks that are both huge expansive free roaming role playing games The Witcher III and Elder Scrolls online – Tamriel Unlimited. . I have been struck by a few experiences that I have had in these environments. Ones that reach past just playing a game or getting some points/gold/kudos/screenshots.

If you are not a gamer, or don’t engage with these sorts of things they may seem almost identical. They are certainly in a genre and have lots in common. 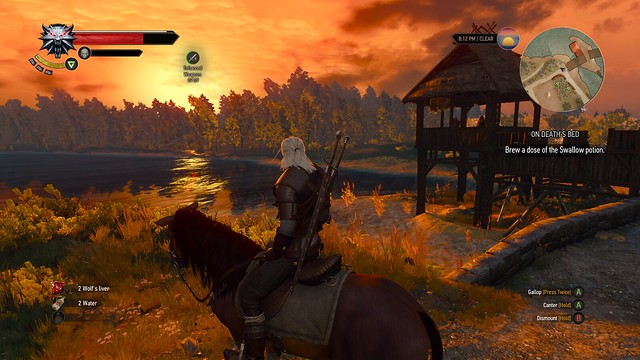 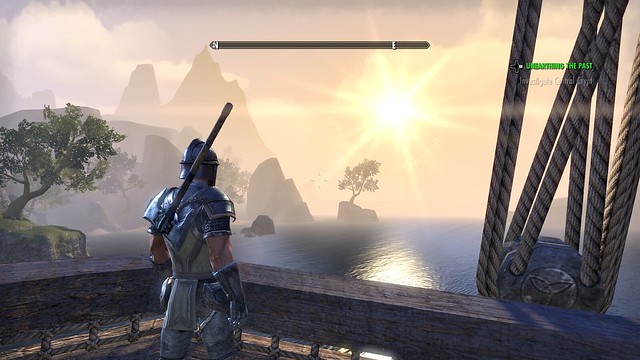 As you can see in both you are able to take a break from any action and just appreciate the environment. This is not intended to be a graphic comparison though the slightly different styles, yet still aiming for the “real” is noticeable in these two examples.
Witcher III is a single player game. It is a story driven plot. A very long story it would seem too. Like all role playing games it rewards your play with new skills, levels and abilities as you level up. You gradually unlock the very expansive world with all its challenges and new types of monsters and bad guys as you progress through the main storyline. This generally involves traversing the world searching and fighting in various ways. It has a 3rd person style of free form combat. You choose the type of weapon and various potions and armour to give you a fighting chance against increasingly higher level creatures. You can just wander off the plot and the beaten track and see what you bump into. However this particular RPG reminds you constantly that whilst you might feel you have learned a lot there is still more levelling up to do as you arrive at a place in a world full of things that can cut you down with a single strike. Level systems in RPG’s generally appear as numbers on the display. When you have spent 20 hours playing and just reached level 7 and you wander into a clearing with a large beast that says level 35, where level progression is non linear and requires exponentially more effort and time per level you know you are in trouble. Witcher reminds you that no matter how heroic and skilled you thing you are, there is always something bigger and better. It has a grittiness to the entire game that brings a sense of foreboding, yet it is still entertaining. However you are very much alone and left to your own devices.

Elder Scrolls Online – Tamriel Unlimited is a very different feel and a very different experience. It is Skyrim (the one player RPG from a few years ago), reborn into a persistent Massive Multiple Player Online experience. Skyrim had been noted for it’s random generation of dungeons combined with its epic land size and the variation of things that you ended up doing in the virtual environment. Elder Scrolls has both a 3rd person and a 1st person view. The latter lets you see the world, and just your hands/ weapons. It lets you use each and on its own, weapon and shield combinations. The weapon can be ranged magic in one hand and a sword in the other. You travel the world finding missions from non player characters. Most of these involve collecting, running to and fro and just like the Witcher III putting things together and crafting items you need, potions, armour, magic, food etc. 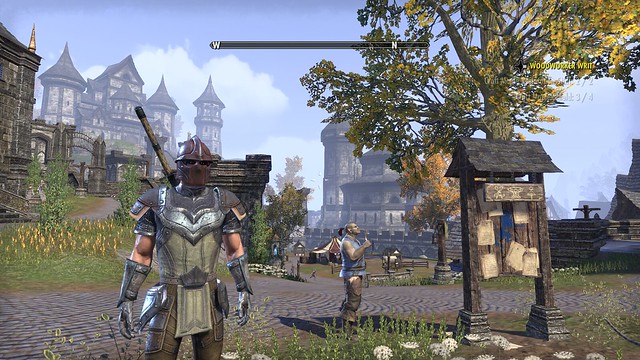 So unlike Witcher III your character is in the environment with lots of other people. Just like the other giants of the MMORPG genre, World Of Warcraft and Eve Online. It is quite unusual for this sort of genre to make it to a console. Usually these platforms get multiplayer shooters where 16-32 people battle for a few minutes in an arena that is then destroyed and reformed for the next battle.
Here we have a world that we all share, all the time. Of course the technical detail of which server, or how anyone is actually in the “same” place is obscured and not entirely relevant to the experience. Also the world itself is generally a locally loaded place. The servers are there to broker player position, communication and hold certain shared features in the experience, but it is not really a full persistent world.

I have found it works really well as a game to be wandering around, getting engrossed in each task, gradually levelling up, choosing skill tree paths, working out what to carry, sell, deconstruct and to craft. Lots of the missions from the non player characters are actually there to help you learn the very complex system of crafting as much as forwarding any plot line points. Choosing missions chooses various guilds and organisations to which you belong. 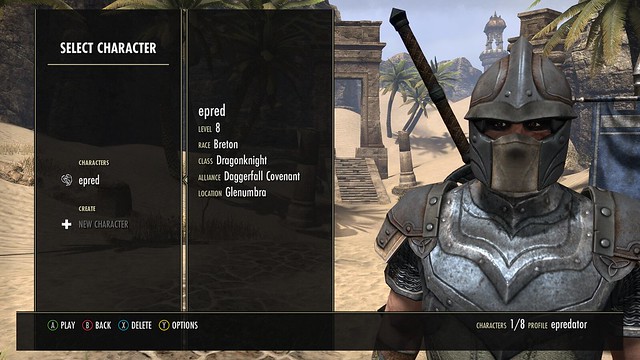 I called this post “alone in the crowd” because it is a particular feature of this style of environment that you do see lots and lots of other people, milling around playing their own missions, but you do not have to interact with them if you don’t want to. Though sometimes it is unavoidable, or required to work in a team. 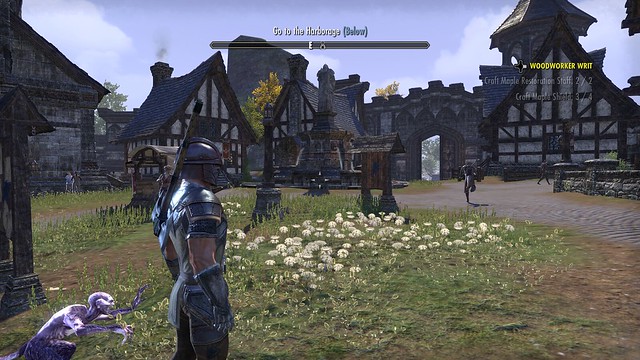 This is by no means a crowd shot! but the character not the right is just running off somewhere. They ran past me, I paid no attention to them, nor them to me other than we just both know we are part of the human noise of this virtual city.

Most things are not restricted based on numbers in the free roam areas. For example the blacksmith station is a object you have to walk up to, select and then take part in an inventory management/crafting dialogue. The things you are doing are entirely related to you and your experience, but we all have to gather around the anvil in order to do this. This is good when there are only a few people, but when it’s busy the room is full of lots of gormless characters standing around. 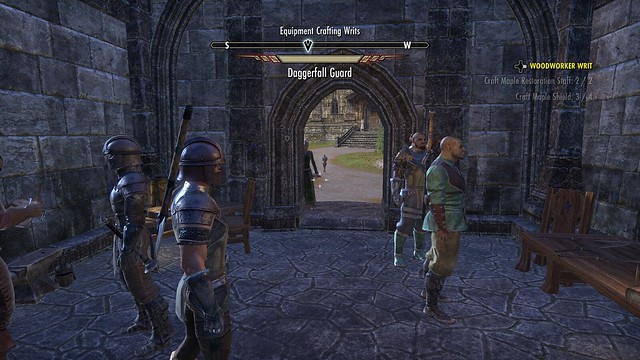 Passing one another in the world feels like something we normally do, it adds to the sense of a shared experience, but all standing around staring into space, or watching people traverse the land mostly by jumping and bounding around in order to get for a to b quickly starts to look like a complete mess of uncoordinated activity. Which of course, it is 🙂
This is a feature of most virtual world online experiences. The only time it is not is when people are more seriously role playing and rules are set to preserve the experience. This happens in some areas in Second Life where you are encouraged to be wearing the right clothes, speaking the right way to join in with the entertainment of acting. Rather like not turning at a real life roman re-enactment on a segway wearing a stetson.
That is not to detract from the game, or games like it. This is a genre where stuff like this has to happen due to the way the tech works, but also the way people work. It is funny, but it can be a jolt in the immersion.

Where this sharing of space does work though is in battles with things in the environment and things in it. You can be wandering around exploring and then be set upon by a pack of wolves. When you start fighting it becomes “your” battle. However other people passing by can also see and join in with that battle, or choose it ignore it. Those wolves become a shared experience. There are a lot more bad guys than wolves but it’s an easy example to use. For a short period of time, you and the others who just happen to be there at the time are no longer alone. You are working with the same problem. Now this could just be thought of as a few experience points of resources to add, share split, ignore but it has all sorts of extra dynamics.

If you see someone in trouble, do you help ? Does your helping actually hinder and annoy them? as they were challenging themselves and their character.
Sometimes you just have to join in in order to be able to get the things you need to proceed. In one particular example the bits of a monster were needed in order to escape an area. If someone else kills the monster before you get any sort of hit in then you are not credited with any part of the kill so do get the bits you need. This meant waiting, or searching for another one of the same type, waiting for a re-spawn and getting in there before the rest of the crowd. Game design and rules may have altered how many people might be competing for this single resource, and I did escape, but it was an interesting co-opetition dynamic.

This led also to another thought on timelines, on the immersive experience and how we are often reminded of our place in these virtual worlds. Having worked towards a small piece of the plot and defeated a particular boss, whereby a slight levelling occurred, new kit and a small buzz of excitement at having completed something, whilst standing near the same spot taking stock a new crowd arrived. Of in the distance I heard the bad guy arrive again, go through the same “No mr bond I expect you to die” style of dialogue. I watched from the distance as my fellow travellers and gamers fought the same battle, but in a different way. In my timeline, this battle was over. I was stood in what was attempting to be a coherent virtual experience being reminded I was not. It is not a problem, as such, but it is a thing.

It is reminder and a breaking of the story. Yet I think there may be something in this kind of feeling of immersion and then shocking back into reminders it is not real. It is an accident of the technology restrictions that cause this to happen. It is a technique used in other media when the action breaks the plane to the fourth wall. When a stage actor talks to the audience when previously the audience were passive. Some of the most chilling of these have been Kevin Spacey in House of Cards. The very occasional, to the point you think they have forgotten to write any in, turning to the audience and engaging in dialogue is very special. One of the most memorable being “Oh did you think I had forgotten about you?” still gives me goosebumps thinking about it.

It should not matter if we choose to form clans and take on multiplayer missions, or just act on our own in these worlds. The very mechanism we are using has the ability to reach back out to us and surprise us. I have felt this in games just a few times. It may be a party trick in some cases but reaching out to the human, through the role play, through the immersion may just be the most memorable and entertaining thing a virtual world can do.