A few days ago my copy of the book “Commodore Amiga: a visual Commpendium book” that I backed in Kickstarter arrived. The book is by Sam Dyer through BitmapBooks. It came with a load of extra goodies from my backing and my name along with my fellow backers vanity printed in the appendix. The only slight problem was that unlike all the other Kickstarter campaigns I wasn’t “allowed” to have a credit as epredator as it made the list look untidy unless we had normal names. That is the authors choice of course 🙂 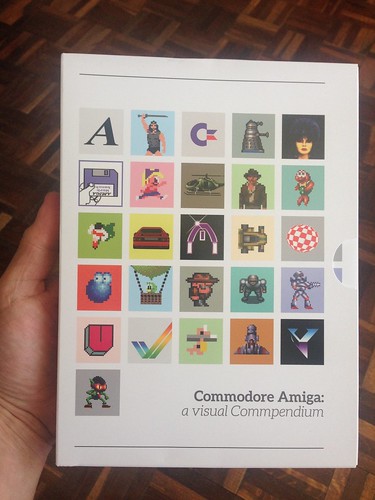 My computer owning history went ZX81, Commodore 64 then Amiga 500 (and later 1200). The Amiga was 1987 and became my main machine for most of my polytechnic/university time. It caused me to get an overdraft for the first time to buy an external hard drive for a piece of work I was doing (that and to play the later cinemaware games that needed two floppy disk drives to work).
It was the machine I coded my final year project, which was a mix of hardware and software but also had to work on the much larger and more expensive Apollo computers we had.
It is the machine I spent ours with sellotaped together graph paper planning my SimCity builds and mapping Bards Tale Dungeons.
It is also the machine I first experience proper network gaming on with a null modem cable and F/A-18 flight simulator. Not only was that the first proper LAN party gaming but it forged the idea that machines do not have to have a consistent shared view of the world just because they are connected. The F/A-18 simulator let my good friend Wal and I fly around shooting at one another in a shared digital space. It was the early days of having a printer and being able to do “desktop publishing” aka DTP. I even produced a poster for our little event.
When we played we had different terrain packs running on each Amiga as we had different versions of the game. There was no server this was really peer to peer. The terrain was local to each Amiga, but the relative location of one another in that space was shared. Each machine was doing its own collision detection. It meant if I saw mountains I needed to avoid them, yet on the other machine that same local space might be flat desert. We all perceive reality differently anyway, but here we were forced to perceive and act according to whatever the digital model threw at us. In reality we kept to the sky and forcing your opponent into their own scenery was considered unsporting (though occasionally funny and much needed).
This set the precedent for me that whilst mirror worlds, virtual worlds that attempt to be 100% like a real place, have a reason to exist we do not have to play by the same physical rules of time and space in virtual environments.
Other things of note about the Amiga. Well I coded as predator on the Commodore 64 and that moved across to the Amiga too. The e was a later addition on the front by the principles are the same.
My wife also discovered gaming on my Amiga. Getting completely wrapped up and in the zone on Sim City and realising it was 4am. Later it would be Lemmings that caught her attention. Hence she is now elemming on twitter.
The book is full of classic images nearly all of which I have some sort of memory of that is more than yes I recognise that picture.
Games like Alien Breed (a gauntlet like top down shooter) and The Secret Of Monkey Island (a classic point and click humorous adventure) on their own rack up considerable hours of entertainment for very different reasons 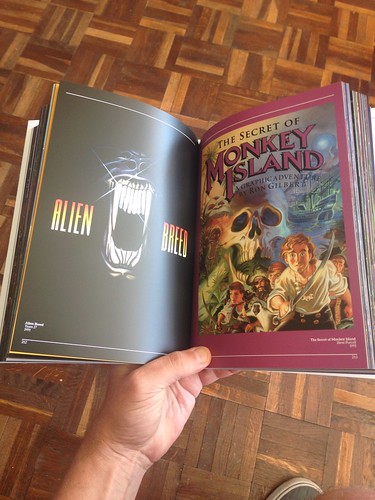 Whilst fondly reminiscing and remembering things that impact how I think and work today I was also at the same time in current and future mode. Right next door on the table was my copy of Games(TM) 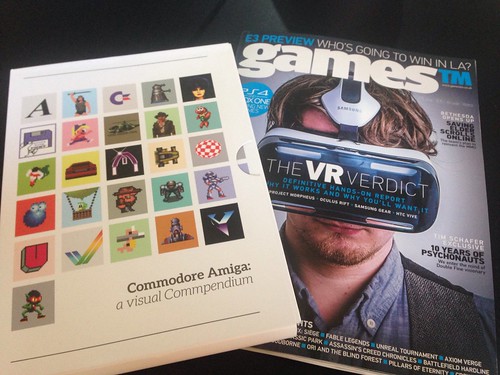 As I tweeted at the time My life history in 1 picture #nearly #amiga #vr #metaverse.
When we put on a headset, a total immersion one, we get a view of a world that is instantly believable. Something fed directly to our eyes and linked to the direct we are looking becomes a convincing reality. In a shared virtual world we will assume that we are all seeing the same thing. That does not have to be the case, as with the F/A-18 example. We can have different experiences yet share the same world. To help think about that consider the game Battleships. Each player has the same map, the same relative grid references on a piece of paper or on plastic peg board. yet on that map you can only see your own boats and any pieces of information you have gained through playing. When considering a mirror world or a virtual world build it can be harder to consider this. Yet many games and environments already have a little dollop of this behaviour with personal displays of health, ammo, speed etc in a Heads up Display. Those HUDs are an augmented reality display in a virtual world.
When we now consider the blended view headsets like the HoloLens and the MergeVR we are taking the real world as the server in effect. It is a fixed environment. We are then placing and enhancing what we see in that world with 3D overlays. Convincing the viewer the digital stuff is real.
Unlike the F/A-18 terrain the real world is there for each person. If there is a table in the middle of the room, even if you make it look like it is not for a headset wearer with object removal and clever visuals they will still trip over it. However the other way around can make for an interesting dynamic. headset wearers made to think there are obstacles and things in their way that they have to move around, but its different for each headset wearer. Just a little though experiment in perception. I didn’t even throw in anything about 3D printers actually making the new obstacles in the real world. That’s a bit much for a monday morning.
Anyway, the Amiga book is great. It was a fantastic period in games and in home technology, but we have many more exciting times coming.